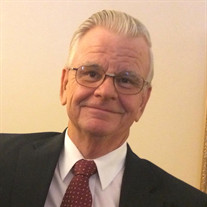 William A. “Billy” Ruff Sr. went to be with his Lord and Savior on Saturday, July 27, 2019 at his home in Florence, MS. Visitation will be from 9:00 a.m. until the 10:00 a.m. Memorial Service at Hickory Ridge Baptist Church in Florence. Billy was born September 7, 1941 in Jackson, MS. After graduating from Florence High School, he started working in the auto parts business, later opening his own parts store in 1982. In 1992, he started a stump grinding business, which he loved doing, especially getting to work alongside his son, Andy. He loved his family and was very much a “family man”, who always made time for his kids and grandkids. Billy spent over 50 years faithfully serving the Lord at Hickory Ridge Baptist Church. He served as a deacon for 53 years, and Sunday School teacher for over 40 years. He was a dedicated man of prayer and loved to study the Word of God. Mr. Ruff is preceded in death by his father, James “Jim” Ruff of Pearl; stepmother, Jeanne Ruff of Pearl; and his sister, Patricia Scarborough of Richland. He is survived by his loving wife of 57 years, Maurell Ruff of Florence; brother, Bobby (Carolyn) Ruff of Brandon; daughters, Shelley (Rodney) Herndon and Beverly (Tim) Dear both of Florence; son, Andy (Amy) Ruff of Florence; grandchildren , Taylor, Abby, Austin, Jonathan (Jesse), Brandon, Madison (Chandler), Kennedy, Cydney; and his great grandchildren, Landry, Lennon, and Lawson. In lieu of flowers, memorials may be made to the Hickory Ridge Baptist Church Missions fund or to the Alzheimer’s Association.

The family of Mr. William "Billy" Anderson Ruff Sr. created this Life Tributes page to make it easy to share your memories.

William A. “Billy” Ruff Sr. went to be with his Lord and Savior...