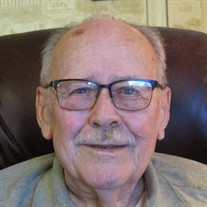 After a long and full run at life, William "Bill" John Palmer departed for his heavenly home on August 5, 2020. He leaves his loving family with a legacy of love, curiosity, and service. Little Billy was born to Frederick and Lanora "Nora" Palmer on August 22, 1933 in San Diego, CA. He grew up roaming the Mississippi woods that would become both his vocation and his refuge as an adult. Upon graduation from Forrest County Agricultural High School, he enrolled in the University of Southern Mississippi. After earning his bachelor's degree, he served as an Artillery Officer in the U.S. Army before going on to receive a Masters in Forestry from Louisiana State University. Bill dedicated the next 30 years of his life to the U.S. Forest Service. In September, 1960, he married Sandra Blount, who would be his companion for the next 53 years. Together they had 2 children, William John, Jr. and Lisa. When Bill retired, the couple settled down in a log house outside of Mendenhall, where he continued to garden, canoe, birdwatch, and just putter around the yard until 2017. Bill spent the final years of his life enjoying the steadfast care of his loving daughter Lisa. Though his body weakened, his mind never did. An avid reader and keen observer, Bill possessed a prodigious knowledge of everything from botany to U.S. history to Korean television. Whatever the topic of conversation, he knew enough to provoke a lively, and often contentious, debate. He had a wry sense of humor and loved to rile his grandchildren. Despite his orneriness, Bill was a deeply loving man. The tenderness and selflessness with which he cared for his wife Sandra in her final years epitomized sacrificial love. His life is a model for the generations he leaves behind. Bill was preceded in death by his wife Sandra, his grandson Taylor Costello, and his great-granddaughter Aurora Lee Costello. He is survived by his son William John “JP” Palmer, Jr. and wife Sherry; his daughter Lisa Costello and husband John; his grandchildren Hannah, Kara, and Ethan Palmer and Sean Costello and wife Katie; and his great-grandchildren William Palmer Harrell and Liam, Elijah, and Michael Costello. Bill will be deeply mourned and missed.

After a long and full run at life, William "Bill" John Palmer departed for his heavenly home on August 5, 2020. He leaves his loving family with a legacy of love, curiosity, and service. Little Billy was born to Frederick and Lanora "Nora"... View Obituary & Service Information

The family of Mr. William "Bill" John Palmer created this Life Tributes page to make it easy to share your memories.

After a long and full run at life, William &quot;Bill&quot; John Palmer...