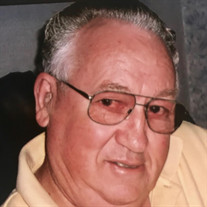 William “Bill” Lee Adcock, 80, went home to be with his Lord on Saturday, December 22, 2018 at St. Dominic Hospital in Jackson, MS. His family will receive friends from 10:00 a.m. until the 1:00 p.m. Funeral Service on Wednesday, December 26, 2018, at Chancellor Funeral Home in Florence, MS (2576 Hwy 49 South). Interment will follow in the Garden of Memories adjacent to the Funeral Home. Bill was born in McAdams, MS, to the late Elmer Lee Adcock and Maggie Lou Deloach Adcock. He graduated from McAdams High School in 1956. After completing Mechanical Trade School in Nashville, TN, he moved to Jackson, MS and began work at Lloyd Ford as an auto mechanic in 1959. In that same year, William met Betty Bridges and after a 6-month long courtship, they were married. William joined the U.S. Airforce in 1960 and was an active member of the Airforce National Guard until his military retirement in 1983. He had several professions as an electrician and mechanic including airplane engine repair for the National Guard. He began work for Packard Electric in Clinton, MS in 1973 and eventually retired in 2004. William was the “Life of the Party” wherever he was; he always had something witty to say and had an infectious laugh that will never be forgotten. He had a servant’s heart and was always willing to help others at the drop of a hat. There wasn’t an engine he couldn’t repair or an electrical problem too large for him to solve. His hobbies included drawing, painting, solving geometric puzzles and engine repair. Bill is survived by his wife, Betty Adcock of Florence; son, Bill (Michelle) Adcock of Brandon, MS; daughter, Jennifer (Dewayne) Hammons of Brandon, MS; four grandchildren, Wyatt Adcock, Weston Adcock, Gracie Hammons and Allie Hammons; sister, Martha Lou Cothran of Jackson, MS; and numerous nieces and nephews. William loved the Lord and his family celebrates that his body and mind have finally been healed. His loved ones are at peace to know they will be reunited with him one day in Heaven. In lieu of flowers, the family asks that donation be made to the American Kidney Foundation.

The family of Mr. William 'Bill" Lee Adcock created this Life Tributes page to make it easy to share your memories.