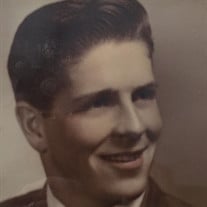 William H. “Bill” Allen passed away August 15, 2018. He was born on May 14, 1930 in Magee, Mississippi to Una and Raymond Allen. The eldest of ten, he became a football star at Magee High School and met the love of his life, Dorthy Ann Bynum (1931-2017). The two married in 1948 and began what would become an extremely fulfilled and exciting life together. A year later, the young couple welcomed their first child, a son named Bob (Theresa) and eleven years later, welcomed a daughter, Susan (Mike Liles). With the loving support of his wife, Bill became a highly respected Mississippi business leader by building one of the most successful Mack Truck dealerships in the country. He was an active member, and one-time president of the Mississippi Truckers Association. Bill was committed to living life to the fullest and enjoyed sharing his experiences with his and family and friends. He raised Tennessee Walking Horses and was the proud owner of the 1974 world grand champion four-year-old mare, winning that year at the Tennessee Walking Horse Celebration in Shelbyville, Tennessee. In addition to his love of horses, he was an avid hunter and fisherman, and made sure his children acquired his love for the outdoors. In the 1970s he was appointed by his friend and then Governor, Bill Waller to serve on the Board of the Mississippi Department of Wildlife, Fisheries and Parks, allowing Bill to work with other board members to establish the Pascagoula River Wildlife Management Area, ensuring that this beautiful, undisturbed area in Mississippi would be protected for future generations. He was a devoted Christian and shared his love of God with other members of Lakeshore Congregational Methodist Church on Siwell Road in Byram. In addition to his children, he is survived by three grandchildren and three great-grandchildren, William Kirby Allen, Lauren Allen Caraway (Ricky), and Lindsey Allen Dobbs; Carson and Cole Caraway and Annabelle Allen. He is also survived by four sisters and one brother; Barbara Allen, Dot Harvey, Ann Hawkins, Pat Powers and Larry Allen. In 2017, he lost his beloved wife, partner and friend of over 70 years, and it is comforting to know the two are now reunited. Visitation will be 1-2pm Friday, August 17, 2018 at Lakeshore Church in Byram with Celebration of Life services beginning at 2pm.

The family of Mr. William H. "Bill" Allen created this Life Tributes page to make it easy to share your memories.