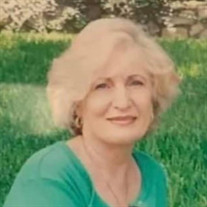 Willi Ruth Lewis, 78, passed away on Sunday, March 06, 2022 at Clinton Healthcare in Clinton, MS. Visitation will be held at Chancellor Funeral Home in Byram, MS on Friday, March 11, 2022 from 12:00 p.m. until the hour of the service at 2:00 p.m. Interment will follow at Lakewood Memorial Park in Jackson, MS. A long-time resident of Terry, MS, Ruth was born in Raleigh, MS on January 17, 1944. A graduate of Provine High School, she obtained her undergraduate degree from Mississippi College and her master’s degree from Mississippi State University. She was employed as an educator for almost 40 years at several schools in the metro area, including McCluer Academy, Hillcrest Christian School, and Madison Avenue Elementary. Ruth was a member of the Daughter’s of the American Revolution (DAR), and was also a member of Lakeshore Congregational Methodist Church. She enjoyed traveling and visited numerous different countries. Ruth had a very close group of lifelong friends, and she treasured them dearly. Her greatest joy was spending time with her grandchildren. As long as she was able, she never missed a function or sporting event. There aren’t enough adjectives to describe Ruth, but some of them include strong, intelligent, energetic, caring, funny and beautiful. She impacted the lives of everyone who met her. Ruth was preceded in death by her husband of 55 years and the love of her life, I.M. “Duke” Lewis; mother, Vadie Adams; and nephew, Michael Wheeler. She is survived by her son, Jeff (Dian) Lewis of Byram; grandchildren, Emily Lewis and Reece Lewis; and sisters, Shirley Wheeler of Shreveport, LA and Lindy Stover and Dot Henderson, both of Ft. Worth, TX. Pall bearers will be Stacey Cook, David Banks, Wesley Banks, Holt Banks, Lamar Alexander and Lathe Ward.

The family of Mrs. Willi Ruth Lewis created this Life Tributes page to make it easy to share your memories.