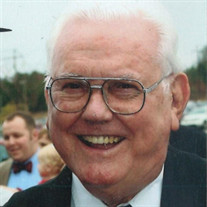 Wilbur M. Irwin, 93, of Byram, went home to be with the Lord, Thursday morning at 5:02 AM, August 13, 2020. Visitation will be at Faithview Baptist Church on Sunday, August 16, 2020 from 2:00 p.m.--4:00 p.m. and again Monday, August 17 from 12:00 p.m. until the hour of the service at 1:00 p.m. A graveside service will follow at Lakewood Memorial Park at 3:00 p.m. Bro. Irwin was born in Port Gibson, MS to Orlando E. Irwin and Annie Mae Potter Irwin on December 23, 1926. He attended school in Port Gibson where he also worked in the family dogwood sawmill. At the age of 17, he enlisted in the US Marine Corps to serve his country during WWII. He returned home to marry the love of his life, Evelyn Strickland, in 1948, at Parkway Baptist Church in Jackson. Church was always an important part of life for the couple as they started their family, raising their children in the fear and admonition of the Lord. Bro. Irwin was a successful businessman in the sawmill business when he felt the call of God to preach to which he surrendered. He entered Mississippi College in 1957 and then New Orleans Baptist Theological Seminary, graduating with a Master of Divinity in 1964. He pastored Pocahontas Baptist Church from 1963-1966 and Forest Hill Baptist Church from 1966-1986. In 1987 he was called to pastor Faithview Baptist Church in Raymond where he served faithfully until his recent illness in 2020. Throughout his ministry, missions have been his heart both at home and internationally through answering the call by going, giving, and constant prayer. Besides pastoring, Bro. Irwin served as a Chaplain at the VA hospital in Jackson from 1977-1997. Bro. Irwin always enjoyed time with his family, gardening, woodworking, and traveling. One of his simple pleasures was driving down the Trace during dogwood season. Music was a special part of Bro. Irwin’s life as he sang in a Men’s quartet in his early years. In 1974, he was diagnosed with throat cancer. Facing possible loss of his voice, he prayed and made a commitment to the Lord that he would preach the Word and share the gospel of Jesus Christ as long as he had a voice. He fulfilled this promise. In his daily walk he would ask anyone he met if they knew the Lord, often praying in person or over the phone with those in need. Rarely did one leave his presence without hearing the words, “Let’s have prayer together.” He continued to enjoy making music by playing the harmonica and with his beautiful whistling. He is known and remembered by many as “the man who whistles”. You may have heard him yourself, whistling favorite hymns in a waiting room, a restaurant, or along with the congregational singing on any given Sunday morning! He leaves behnd his 3 children: Carol Winstead Swofford (Robert), David Irwin (Von), Rachel Byrd (Darron); 8 grandchildren: Shan Winstead (Jenny), Allison Gros (Slade), Courtney Stewart (Jason), Anna Irwin, Andrew Irw in, Abbey Irwin, Jordan Byrd, Ashton Byrd; 8 great grandchildren: Cole Winstead, Triston Gros, Maddie Gros, Blaise Winstead, Easton Stewart, Kipp Stewart, Samantha Gros, Johnna Marie aGros; 1 sister, Katherine Webster and many nieces and nephews. He is preceded in death by his parents Orlando E. and Annie Mae Irwin; his wife of 60 years, Evelyn Strickland Irwin; son-in-law, John H. Winstead; siblings: Evelyn Irwin, Eilene Duett, Jeanette Townsend, O.E. Irwin, and brothers-in-law: Rudy Duett, Marion Townsend, and James Webster.

The family of Rev. Wilbur Maurice Irwin created this Life Tributes page to make it easy to share your memories.