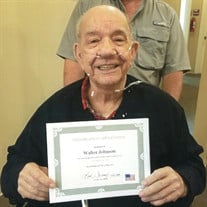 Walter “Glenn” Johnson, Sr., 86, passed away Saturday, January 5, 2019 at Villa South Assisted Living in Florence, MS. A visitation will be held from 9:00 a.m. until the 11:00 a.m. funeral service Friday, January 11th at Spring Valley Baptist Church in Mathiston, MS. Interment will follow in the Spring Valley Baptist Church Cemetery. Rev. Charles White will officiate. Glenn, as he was known, was born on September 28, 1932 to Lawrence J. Johnson and Callie Sue Rogers Johnson in Choctaw County in the Sherwood Community. He worked as a share cropper and woodcutter prior to joining the military in 1948. He was a member of USAF and Army until 1969 in which he served through all enlisted ranks and was commissioned as a warrant officer reaching grade level II. He served with the 25th infantry division. Glenn was a Korean War Veteran, Vietnam Veteran and served in the Cuban Missile Crisis. He was a decorated combat veteran receiving the Bronze Star for Valor in battle along with numerous awards. He loved his family and tinkering with cars, trucks and old tractors. He was always ready to help anyone who needed it and was a very charitable man. His illness and pain overtook his body over time and the Lord called this Christian man home. He now makes his place in paradise. Along with his parents, Glenn is preceded in death by his son, Walter Glenn Johnson, Jr.; two wives, Lee Lois Boatman Johnson and Wilma Rice Johnson; brother, Richard Johnson; sister, Merle L. Arnold; and step-siblings, Charles Stepp, Money, Harvey, Odie Johnson, Katie Bell Mann, and Irene Jenkins. He is survived by son, Meredith “Bubba” Glenn Johnson (Velvet); daughter, Belinda Lois Williams (Larry); grandchildren, Amber Elizabeth Johnson Stephenson, Marlee Ann Johnson Ingram and Dakota Allan Williams; and seven great-grandchildren.

The family of Mr. Walter Glenn Johnson Sr created this Life Tributes page to make it easy to share your memories.