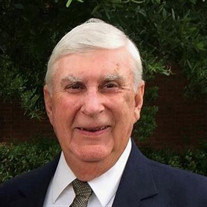 Wade Lee Overby, 80, of Richland, Mississippi, passed away July 25, 2021 at Hospice Ministries in Ridgeland, Mississippi. He was born June 12, 1941. Wade was retired in 2007 from the City of Richland where he worked as Manager of Public Works. Prior to that, he worked as Vice President of Service at Unitech, Inc. of Mississippi (Ikon Office Solutions) from its founding in 1982 until 2003 and at IBM until 1982. Wade was also committed to public service. He was elected three times to the board of alderman for the City of Richland, serving as mayor pro tem until 1988. In 1988, he was appointed by Governor Ray Maybus as District 1 Supervisor of Rankin County. Affectionately called “Happy Pappy” by his grandkids, Wade was an eternal optimist. He always looked for the good in people and circumstances. Every time he was asked how he was doing, Wade would respond, “I woke up today. Every day’s a good day!” He might best be described as a principled man and a peacemaker. He led by example, inspiring, guiding and nurturing everyone around him to always act with integrity and character. Numerous former colleagues have stated that whenever they reached a challenging impasse or conflict, whether it be a debate at city hall or a meeting at work, they would often call on Wade to help resolve the situation. Wade and his devoted wife of 58 years, Linda, loved to travel. Usually accompanied by their canine companions, they drove their RV everywhere from the Canadian Rockies and Pacific Northwest, to the Dakotas, Great Lakes, and New England. Their favorite destination was the Black Hills of South Dakota. Closer to home, they could often be found camping along the shores of Lake Bruin, Louisiana, with family and friends. A man of deep faith and musical talent, Wade was a member of Mountain Creek Baptist Church in Florence, MS. During the 1980s, he sang with multiple gospel groups including The Southland Boys with whom he recorded several albums. His voice was a deep true bass that added depth to any performance. He graduated from Florence High School and Hinds Community College where he served as a member of the Florence High School Band and the Hinds Eagle Band. Wade was a family man who loved his wife, children, grandchildren and great grandchildren more than anything in the world. He also adored his sweet companion dog and best friend Smoky. Wade will be deeply missed by all. Wade is survived by his wife, Linda Quinn Overby of Richland, MS; son, Jeffrey Wade Overby and wife Leslie of Nashville, TN; daughter, Lori Lee McClendon and husband Jim of Richland, MS; granddaughter Sarah Overby of Valencia, SPAIN; granddaughter Rachel Overby of Arlington, VA; grandson Garrett Nichols of Richland, MS; granddaughter Lyndsi Nichols Davis and husband Spencer of Richland, MS; grandson Trey Nichols of Richland, MS; granddaughters Sophi McClendon and Ava Kate McClendon, both of Richland, MS; great grandson, Lawson and soon-to-be Bruin Wade; and several nieces and nephews. He was preceded in death by his parents, Enos Wade (Billy) Overby and Minnie Lee Overby and brother Freddie Michael Overby, all of Florence, MS. The family wishes to thank Dr. Bobby Graham and Hospice Ministries for the loving care provided, especially Annalyssa, Mary, Adrienne, Mary, Donna, Robin, Billie, and numerous others. A graveside burial service was held July 27 at 10:00 a.m. at Richland Cemetery, Cleary Rd., Richland, MS. Online guestbook may be signed at www.chancellorfuneralhome.com.

Wade Lee Overby, 80, of Richland, Mississippi, passed away July 25, 2021 at Hospice Ministries in Ridgeland, Mississippi. He was born June 12, 1941. Wade was retired in 2007 from the City of Richland where he worked as Manager of Public Works.... View Obituary & Service Information

The family of Mr. Wade Lee Overby created this Life Tributes page to make it easy to share your memories.