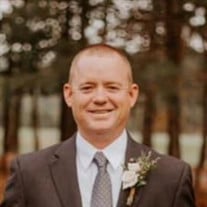 Todd Samuel Wilson, 43, passed into the arms of Jesus on Thursday, April 9th, 2020 at University of Mississippi Medical Center in Jackson. A private family memorial will be held at a future date. Todd was the first child of Lonny and Sherry Wilson, born April 19, 1976. He grew up in Waynesboro, MS and graduated from Wayne County High School, Class of 1994. Todd felt his greatest accomplishment was his son, Dylan Wilson, age 8. Dylan inherited Todd’s passion and love for sports and Southern Miss. Any weekend these two could be found watching the Golden eagles, tossing a ball in the yard and playing a game of baseball. This past year, Todd coached the Brandon Dirt Bags, an 8U travel baseball team where Dylan played. Todd touched the lives of these kids as a coach and more than they knew, these kids touched his heart. He was very proud of the Brandon Dirt Bags family. Todd had a “buddy” in everyone. Thank you to all of his friends that have reached out to our family in this time. Your stories have made us laugh and cry. Your thoughtful words included “always willing to help a friend”, “like a brother” and some of your “better childhood memories, he was there”. Todd found happiness in “roughing up” play wrestling with Dylan and his nephews and teasing them in preparing for the upcoming arrival of our first ever, baby Girl Wilson. Todd is survived by his mother, Sherry Wilson; his son, Dylan; brothers, Matt (Brittany) Wilson and Brett (Jasmine) Wilson; and nephews, Gray and Beau Wilson. He is preceded in death by his father, Lonny Wilson. We will greatly miss Todd on this Earth, but Dylan asked (and we believe), Lonny and Todd are together again on a golf fairway in Heaven. “My home is in heaven. I’m just traveling through this world.” Billy Graham In lieu of flowers, the family asks that memorial gifts may be made to the established college education fund of Dylan. Contributions can be made at BancorpSouth Bank, or mailed to 116 Saint Martin Street, Madison, MS 39110, c/o Matt Wilson.

Todd Samuel Wilson, 43, passed into the arms of Jesus on Thursday, April 9th, 2020 at University of Mississippi Medical Center in Jackson. A private family memorial will be held at a future date. Todd was the first child of Lonny and Sherry... View Obituary & Service Information

The family of Mr. Todd Samuel Wilson created this Life Tributes page to make it easy to share your memories.

Todd Samuel Wilson, 43, passed into the arms of Jesus on Thursday,...