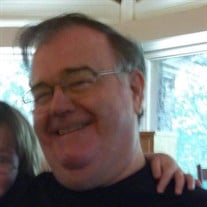 Timothy Monroe Stogner, 75, passed into the arms of Jesus on Wednesday, October 13, 2021 at St. Dominic’s Hospital in Jackson. The family will receive friends for visitation on Sunday, October 17th from 2:00 p.m. until 3:00 p.m. at Chancellor Funeral Home in Florence. A Graveside Service will be at 3:30 p.m. at Terry Cemetery. Tim was born May 11, 1946 to the late W.O. and Nelma Stogner in Terry, MS where he was raised. He has lived in Florence for the past 33 years where was a member of First Baptist Church of Florence and worked as an electronics specialist with Bellsouth for 36 years. He loved God and enjoyed reading his Bible and listening to Gospel Quartets. He was a loving “Papa” to his granddaughters. A Veteran of The U.S. Navy, he was very proud of his military service. He is the type of person who would drop what he was doing and move heaven and earth to help others. Along with his parents, Tim is also preceded in death by his son, Mark Stogner and his grandchild, Hope Stogner. He is survived by his wife of 47 years, the love of his life, Susan Stogner of Florence; son, Andy (Shannon) Stogner of Florence; granddaughters, Katie Stogner and Brooke Stogner; brothers, Dale (Charlene) Stogner of Long Beach, MS and Tommy (Martha) Stogner of Terry, MS; and several nieces, nephews, cousins and extended family members. Pallbearers will be Tommy Stogner, Michael Stogner, Todd Stogner, Michael Case, Gerald Duckworth, and Harry Williams. Honorary Pallbearer is Dale Stogner In lieu of flowers donations in memory of Tim Stogner can be made to Children's Hospital of Alabama or UAB Neurofibromatosis Clinic in Honor of his Granddaughter Brooke.

Timothy Monroe Stogner, 75, passed into the arms of Jesus on Wednesday, October 13, 2021 at St. Dominic&#8217;s Hospital in Jackson. The family will receive friends for visitation on Sunday, October 17th from 2:00 p.m. until 3:00 p.m. at Chancellor... View Obituary & Service Information

The family of Mr. Timothy Monroe Stogner created this Life Tributes page to make it easy to share your memories.

Timothy Monroe Stogner, 75, passed into the arms of Jesus on...