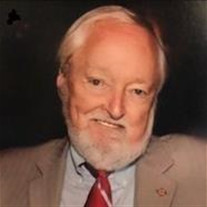 Thurman Eugene Alley, 84 entered the gates of Heaven in the warm embrace of his family on November 16, 2018. Thurman was born in Dolomite, AL on October 21, 1934 to Jesse Irene Riley Alley and Marvin Burton Alley. He attended Oak Grove High School, East Central Jr. College where he was a cheerleader, graduated from The Mississippi State University with a Bachelors of Education in 1962 and received his Masters Degree in Education in 1967 from Southern Miss. He spent most of his educational career in the community college environment. He taught High school briefly in Picayune,MS before becoming the Director of Vocational Education at Pearl River Community College in Poplarville, MS He and his family resided in Poplarville for many years before accepting an Administrator position at Hinds Community College, in Raymond MS in 1974. He called Raymond home until his retirement in 1991 at the age of 57. Thurman and Nancy moved to the reservoir area and established deep roots and relationships with their wonderful neighbors and friends .He spent a few years doing what he loved, spending time with his family, fishing, and hunting at the Alley Patch at Grenada Lake. The slow pace of retirement wasn’t exactly for him so, he contracted with Nissan to coordinate training for employees at the new plant located in Canton. He was a 32nd degree Mason and Shriner for over 50 years. He participated in several Masonic lodges throughout the state. Thurman had many friends he called his brothers, who spent endless hours conducting degree work. He loved the outdoors and “tinkering” with small engines. He rode the streets on garbage days looking for old lawnmowers and weed eaters to repair. Sometimes returning them to the owner almost new again. He once gave two young boys mowers and maintained them enabling the boys to have summer jobs for the payment of mowing a widow neighbors yard. He believed in paying it forward and everyone he met while making repairs he asked for a conversation and chance to express what God Blessed him with in lieu of payment. Thurman’s determination, strong faith and support from close family and friends carried him through difficult times, especially the loss of his wife, Nancy and his recovery efforts after his stroke in January, 2018. His amazing spirit and legacy will be cherished in the lives of his daughter, Alisa Alley Smith, son-in-law Ernie Smith, their children James and Lindsey Morrison, Carson Smith and Heather Bell, and Brittney and Derek Strong and great grandchildren, Ellery, Mary Michael, Henry Morrison and Beckett, Lila and Easson Strong. He will be united with those that have departed before him including his beloved spouse Nancy Lay Alley, his daughters Patricia Lynn Alley and Robin Alley Rogers, his parents and five siblings. He is also survived by a daughter Missy (Mike) McCain, six other grandchildren, seven great grandchildren, sister-in-law, Kathy Lay Stephens, a special caregiver, Josephine Course and many relatives in Alabama. Thurman’s life will be remembered in a Celebration service on Monday, November 26, 2018 at Pinelake Church in Brandon, MS with visitation from 12-1, with service following at 1 p.m.

Thurman Eugene Alley, 84 entered the gates of Heaven in the warm embrace of his family on November 16, 2018. Thurman was born in Dolomite, AL on October 21, 1934 to Jesse Irene Riley Alley and Marvin Burton Alley. He attended Oak Grove High... View Obituary & Service Information

The family of Mr. Thurman Eugene Alley created this Life Tributes page to make it easy to share your memories.

Thurman Eugene Alley, 84 entered the gates of Heaven in the warm...