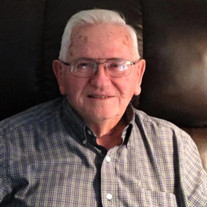 Thomas Edward Schaefer was born in Eupora, Mississippi April 1, 1928, and left this world peacefully on November 5, 2020 in Jackson, Mississippi. Tom is preceded in death by his parents, Doshie Thera (Goins- Schaefer) Burns and Antley Josef Schaefer; and his siblings Joe Dudley Schaefer (Lucille), William Albert Schaefer (Eva), Lonnie Lee Schaefer (Mary Jo), Lee Roy Schaefer and Lois Eliza Brooks (Claude), twin sisters who died at birth, Dennis Amos Burns (Dot), Carl Burns (Jean), Jessie Odell Burns (Betty/Sylvia), and Bobby Earl Burns. He is survived by his wife of 71 years, Mary Lee Schaefer; his children: Nancy Lynn Pickering (Frank), Thomas Edward (Tommy) Schaefer, Jr. (Sharon), Jan Schaefer Hedgepeth (Terry), Ann Schaefer Webster (Rick), and Lynn Nettles May; his sister, Lorene Cummins (Willis); his grandchildren: William Miller (Andrea), Mary Anne Mitchell (Josh), Josef Schaefer, Marlee Schaefer , Jenna Schaefer, Schaefer Hedgepeth, Blake Hedgepeth, Kalli Ayn Hedgepeth, Drew Hedgepeth, Anna Nicole Webster, Remington Webster, and Gage Nettles; and his great grandchildren: Cole Miller, Annaleigh Miller, Barron Miller, and Miller Mitchell. Tom was a Veteran, serving in the United States Navy for two years from April 15, 1946-April 14, 1948, stationed in San Francisco and Guam. Tom was a humble servant of Christ and a founding member of Forest Hill Baptist Church in Jackson, Mississippi. It was there he and his bride, Mary Lee, made a loving home for their children- along with life-long and extended family friendships. He served as Deacon for many years and in any capacity where he was needed. He was the cook for the Baptist Men’s prayer breakfasts and made delicious pancakes. (Ask anyone from Forest Hill Baptist or his grandchildren.) He later became a member of Raymond Road Baptist Church in Jackson, Mississippi and most recently a member of Ridgecrest Baptist Church in Madison, Mississippi. Tom was a humble, kind, and generous man who was slow to speak and quick to listen. When he did speak, his words were filled with wisdom. He set an example every single day - work hard, be genuine, trust God, and love your family and friends. His life was centered around God, his family, and friends. He accepted people as they were. Family and friends knew they could trust him and depend on him if needed. Our loss is Heaven’s gain. In light of the current pandemic, and with a wish to protect friends, family and loved ones, the family will hold a service for immediate family only on Saturday, November 21 at 10:30am at Chancellor Funeral Home in Byram. Funeral and graveside services will be livestreamed on the Chancellor Funeral Home Facebook Page. The family hopes you will join them in this way. A celebration of life is being planned for a later time—tentatively April 1, 2021 (what would have been Tom’s 93rd birthday). Details will be released at a future time.

The family of Mr. Thomas Edward Schaefer created this Life Tributes page to make it easy to share your memories.