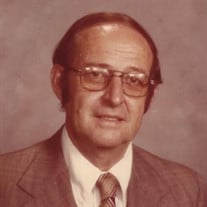 It is with great sadness that we announce the passing of Thomas Edward McGaha, Sr. on June 8th, 2021. He was in his 94th year. He left us peacefully in his sleep with family in attendance while at the Juniper Village Skilled Nursing Community... View Obituary & Service Information

The family of Mr. Thomas Edward McGaha created this Life Tributes page to make it easy to share your memories.

It is with great sadness that we announce the passing of Thomas...