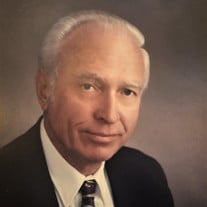 Thomas Gerald Jayroe left this earthly life and went to his heavenly home on Thursday, October 1, 2020, following a difficult battle with laryngeal cancer. He died peacefully at home surrounded by his loving wife and daughters. Visitation will be Monday, October 05, 2020 from 9:30 a.m. until the hour of the service at 11:30 a.m. at Chancellor Funeral Home in Byram. Interment will follow at Union Hall Baptist Church Cemetery in Brookhaven, MS. He was born in Neshoba County near Philadelphia, Mississippi on April 13, 1929, as the second son of Thomas D. Jayroe and Lucille Butts Jayroe. After graduation from high school, Gerald joined the United States Navy for 2 years and then returned to Jackson where he was a General Building Contractor for more than 30 years in the Northeast Jackson area. He was well-respected in the industry and well-loved by all who had the pleasure to meet and know him. He was a member of First Baptist Church in Byram, Museum Masonic Lodge, and has been a member of Wahabi Shrine for many years. He served the Shriners organization as Captain of the Wahabi Color Guard, Potentate of Wahabi Shrine in 1997, and is Past President of the Southeastern Shrine Association. Gerald was proud to be a part of an organization that worked to make lives better for sick and injured children through the Shriners’ Children’s Hospitals and Burn Centers. Preceding him in death were his parents, his two brothers Derrell and W.A. Jayroe, and his grandson Walker Thomas Wilbanks. Those left to cherish his memory are his wife of 61 years Margie Rials Jayroe, his two daughters Lisa Jayroe Barnes and Sheila Jayroe Wilbanks, son-in law David Wilbanks, two grandsons John Landon Wilbanks and Blake Jayroe Barnes, Blake’s wife Kristen Barnes, two beautiful great-granddaughters, Ainsley and Ava Barnes, and several nieces and nephews. The family requests that, in lieu of flowers, memorials be made in honor of Thomas Gerald Jayroe to: Shriners Children’s Hospital 3100 Samford Avenue Shreveport, Louisiana 71103 or The Walker Wilbanks Memorial Scholarship at the Mississippi Organ Recovery Agency 4400 Lakeland Drive Flowood, Mississippi 39232.

Thomas Gerald Jayroe left this earthly life and went to his heavenly home on Thursday, October 1, 2020, following a difficult battle with laryngeal cancer. He died peacefully at home surrounded by his loving wife and daughters. Visitation will... View Obituary & Service Information

The family of Mr. Thomas Gerald Jayroe created this Life Tributes page to make it easy to share your memories.

Thomas Gerald Jayroe left this earthly life and went to his heavenly...