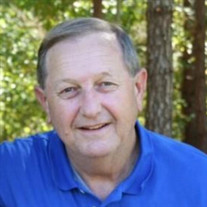 Thomas Gerald Buford was born January 01, 1947, to Gladys and Thomas Doyle (T.D.) Buford. He peacefully passed away on January 29, 2021 at home. He is preceded in death by his parents, Gladys and T.D., and his sister, Doylene. Gerald was married to the love of his life, Claudia, for 53 years. He enjoyed fishing, hunting, and vacationing with his family. He was lovingly known as PawPaw to many. Gerald was a mechanical contractor and owned his own business for over 40 years. Additionally, he served on the Mississippi and Hinds County Association of Plumbing, Heating, and Cooling and served all offices, including President. He was one of the founding members of the Volunteer Fire Department of Byram. He and Claudia were high school sweethearts and were named “Mr. and Miss Byram High School” in 1965. He is survived by his wife, Claudia; his children, Kristin Cooley (Stevie), David (Kimberly), and Jennifer Marsh (Jack); grandchildren, Alex Shoemaker (Corey), Bailey Barnes (Nick), Brayden, Bella, and Baylor Cooley, and Gabrielle, Gavin, Greyson, and Graham Buford; sister, Patricia Mattaice; niece, Angela McKenzie (Brian); great-nieces, Clare and Erin McKenzie; great-grandchildren, Carter, Sophia, and A’Laya; and a host of other family. Our family would like to thank everyone for your prayers, thoughts, and kind words during this difficult time. He was surrounded by his family as he peacefully walked into the arms of Jesus. He was a loving husband, father, grandfather, brother, and uncle. He loved his family more than life itself. He always told us all, “If you don’t have family, you don’t have anything.” Visitation will be Monday, February 01, 2021 from 9:30 a.m. until the hour of the service at 11:00 a.m. at Country Woods Baptist Church in Byram, MS. Interment will follow at Lakewood Memorial Park in Jackson, MS.

Thomas Gerald Buford was born January 01, 1947, to Gladys and Thomas Doyle (T.D.) Buford. He peacefully passed away on January 29, 2021 at home. He is preceded in death by his parents, Gladys and T.D., and his sister, Doylene. Gerald was married... View Obituary & Service Information

The family of Mr. Thomas Gerald Buford created this Life Tributes page to make it easy to share your memories.