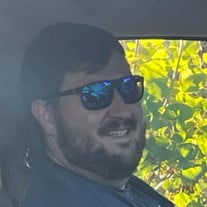 Steven Michael Johnson passed away unexpectedly on Tuesday, November 9, 2021 in Shreveport, LA. He was 32 years old. The family will receive friends from 4-8pm Monday November 15th, 2021 at Harrisville Baptist Church in Harrisville, MS and then again on Tuesday November 16th, 2021 from 9am until the 11am service at Harrisville Baptist Church with the burial to follow at Harrisville Cemetery in Harrisville, MS. Steven was born July 14, 1989 to Michael and Tracy Johnson in Jackson, MS. He was raised in Terry, MS and was currently living in Stonewall, LA where he worked as a metal fabricator in the Aviation industry. He has loved Aviation his entire life and was fulfilling his childhood dreams. He worked hard towards everything he put his mind to. He worked his tail off to receive his airframe and Power plant license. His first love is his daughters and his fiancé, Chelsie. He enjoyed fishing, working on cars and making them faster and louder, and playing pool. He loved music and played drums and guitar. He even had a trailer dedicated to his musical love. He would break things just to fix it the very same day. Steven had a big heart and never met a stranger. If you were having a bad day, being around Steven, even for moments, would brighten your day. To know him was to love him. His laugh was contagious. Steven was preceded in death by his grandparents, Barney Carpenter, Lee Lois and Albin Sims. He is survived by his fiancé, Chelsie Fulton of Stonewall, LA; daughters, Holley May and Makenna Johnson of Stonewall, LA; parents, Tracy and Mike Johnson of Florence; and his 2 very best friends, his sister, Toni (Michael) Cardin of Florence, his brother, Trey (Nicole) Thompson of Terry, MS and maternal grandmother, Patricia Carpenter. In lieu of flowers, please make donations to Stevens girls Chelsie, Holley and Makenna at a donation box at the service or via go fund me. (http: // gofund.me/8ecff115). This link can be found on Facebook. Online guestbook may be signed at www.chancellorfuneralhome.com.
To order memorial trees or send flowers to the family in memory of Mr. Steven Michael Johnson, please visit our flower store.