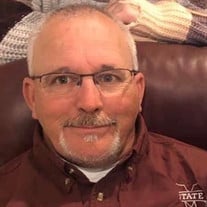 Steven Michael Biggs To be absent from the body is to be in the presence of the Lord. Steven Michael Biggs passed away unexpectedly at his home the morning of January 24, 2020; 24 years to the day of losing his grandfather J.B. Black. Steve was born on September 7, 1966 to Frances Olivia Biggs. He was a lifelong resident of Jackson spending many summers on baseball and softball fields across the state of Mississippi. Entering Council McCluer as a kindergartener, he graduated in 1984 with friends since K5, Lamar Alexander, Shannon Lowery, and Sydney Malone. This is also where he met Missy Covington, who after many years of dating, finally said “I Do” to each other and to God on July 20, 1996. Baylee Claire Biggs completed their family with her early arrival in December 2006. Without a doubt, being a husband and father brought Steve his greatest happiness; walking with them while seeking God’s instruction through dedicated Bible study and prayer. Steve drew close to the deacons at Country Woods Baptist Church, serving as chairman of deacons this past year, as well as daily interaction with a group of Godly men appropriately named “The Big Dawgs.” Steve was at peace when on a lake with dear friends and a fishing pole in his hands; or in a deer stand or just in the woods: as well as on a golf course. He was a member of Sunset Road Hunting Club for twenty plus years. Forever clad in Maroon and White, his beloved Mississippi State Bulldogs never had a more devoted and loyal fan. No one yelled Hail State with more passion or rang a cowbell louder than Steve Biggs. Steve was currently employed with Yates Construction working solely from the Nissan factory location in Canton, Ms. Steve leaves behind his wife Missy, daughter Baylee, mother Fran, grandmother Marie Black, and mother in law Cheryl Covington. Steve was preceded in death by his grandfather J. B. Black as well as his father in law Johnny Covington. To list the names of those that poured into Steve, and those that had the privilege to call him friend, would be much too vast. Rest assured that Steve treasured those friendships made from running around Leavell Woods Park to ones recently made; never forgetting a name or how each touched his life. Services will be held on Monday, January 27th at 11a.m. at Country Woods Baptist Church. The family asks that gifts or memorials may be made to the Catch a Dream Foundation.

Steven Michael Biggs To be absent from the body is to be in the presence of the Lord. Steven Michael Biggs passed away unexpectedly at his home the morning of January 24, 2020; 24 years to the day of losing his grandfather J.B. Black. Steve... View Obituary & Service Information

The family of Mr. Steve Biggs created this Life Tributes page to make it easy to share your memories.

To be absent from the body is to be in...