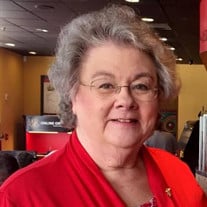 Sherry Carpenter Hofmister, 72, passed away peacefully at her home on Sunday, March 28, 2021. She will be laid to rest with her late husband, Ray Hofmister, at Bethlehem United Methodist Church in Winona. There will be a graveside service for family and close friends on Friday, April 30 at 3:00 pm at Bethlehem Methodist Church. The address is 34 Bethlehem Church Road, Winona, MS 38967. Because this is still the time of COVID, we ask that everyone follow social distancing guidelines and wear masks when inside the church. Let’s keep everybody safe. A resident of Clinton since 1992, Sherry was born on November 16, 1948 in Columbus, MS to Vivian Murray Carpenter and Louise Haynes Carpenter. She grew up in Greenwood and was a member of St. John’s Methodist Church of Greenwood. Sherry graduated from Mississippi State College for Women (now known as Mississippi University for Women) in 1970 and from University of Mississippi Medical Center, School of Health Information Management in 1971. Sherry worked for the State of Mississippi for nearly forty years as a health facilities surveyor for the Department of Health and later as the director of cost containment division of the Workers Compensation Commission. Ever the football-loving Alabama fans, Sherry and Ray were active in the University of Alabama Jackson alumni chapter, and the National Alumni Association awarded Sherry with honorary alumni membership in 2001. Sherry was preceded in death by her husband of 33 years, Ray Hofmister, her parents, and her brother, Robert Murray Carpenter. She is survived by her nieces, Avery Carpenter of Chattanooga, TN and Caroline Carpenter of Memphis, TN, and Todd Wilson, whom she considered a son, and his family. In lieu of flowers, donations may be made to: - The Ray & Sherry Hofmister Endowment Scholarship at the University of Alabama. Checks can be made payable to Alumni Fund (with “Sherry Hofmister” in the memo line) and mailed to Alabama NAA, ATTN: Scholarship Department, PO Box 861928, Tuscaloosa, AL 35486. - Bethlehem United Methodist Church, mailing address at 606 Bethlehem Church Rd, Winona MS 38967 - Or to your favorite charity. ROLL TIDE!!

Sherry Carpenter Hofmister, 72, passed away peacefully at her home on Sunday, March 28, 2021. She will be laid to rest with her late husband, Ray Hofmister, at Bethlehem United Methodist Church in Winona. There will be a graveside service for... View Obituary & Service Information

The family of Mrs. Sherry Carpenter Hofmister created this Life Tributes page to make it easy to share your memories.

Sherry Carpenter Hofmister, 72, passed away peacefully at her...