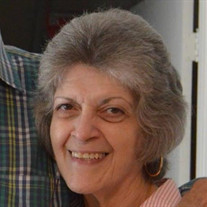 Sharon Rose Lowe Nelson of Brandon, MS, died in her home on Wednesday, May 1, 2019, under hospice care, following complications of a massive stroke. She was 67 years old. Sharon was born at St. Dominic’s Hospital on September 10, 1952, along with her twin brother. Her parents were Ronald Evans Lowe and Rose Mary Fiola, of Jackson, MS. She was a member of the 1970 graduating class at Wingfield High School. Sharon married her late husband, Jerry Eugene Nelson, in August of 1970. They were married 45 years until his death in 2016. They had one child. Meeting a stranger never happened to Sharon. She believed in being kind to everyone she didn’t know, no matter their walk of life. Holding a conversation was her most favorite past time. When she could share her easy knowledge, she was in her zone! Atlanta Braves baseball, NASCAR, and Cowboys or Steelers football were second children to her, and she never missed then if she didn’t have to. She loved to sing to loud music, no matter where she was, and dance to that music when given the chance. She was able to share her love of music with her daughter and granddaughters from the time any of them were babies. Sharon is survived by her daughter, Christina Rose Nelson (Les) Volz and granddaughters, Breanna Rose Volz, Stella Jean Volz, all of Brandon and Taylor Volz (Austin) Bowman and great granddaughter Avery Bowman, all of Pearl. Sharon is also survived by two brothers, Timothy (Teresa) Lowe of Byram and Richard Lowe; two brothers-in-law, Howard (Annie) Nelson of Crystal Springs and Paul (Ruth) Nelson of Lenoir, NC. She also leaves behind many nieces and nephews, great nieces and nephews, family, friends and one special friend who brought pure joy to the last two years of her life; her beau, Mac McClellan and his family. A celebration of life will be held at Chancellor Funeral Home in Florence on Friday, May 10th with visitation from 1-2pm and service to follow at 2pm. A special thanks to all who helped Christy and Taylor care for Ms. Sharon in the weeks preceding and at the time of her death; Donna Williams; Debra King, Addie, Heidi Myers, Jessica Olson and her niece, Lynn Nelson. You all helped us make her final days and her sendoff exactly as she hoped it would be! The family could not be more grateful for your help and presence.

Sharon Rose Lowe Nelson of Brandon, MS, died in her home on Wednesday, May 1, 2019, under hospice care, following complications of a massive stroke. She was 67 years old. Sharon was born at St. Dominic&#8217;s Hospital on September 10, 1952,... View Obituary & Service Information

The family of Mrs. Sharon Rose Nelson created this Life Tributes page to make it easy to share your memories.

Sharon Rose Lowe Nelson of Brandon, MS, died in her home on Wednesday,...