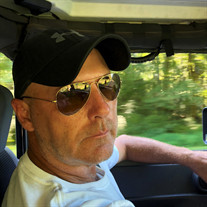 Scott Case was no ordinary man, so his life cannot be adequately reflected upon in an ordinary fashion. If you ask anyone to tell you about Scott, they will promptly share how he was a generous man to a fault. He freely gave of his time, his skill, his resources, and his love. He was a friend to all and accepted anyone who knocked on his door. He was one that all his friends knew they could count on no matter what. He was a man of few words, but when he did speak his words mattered. It is no secret that Scott had trouble staying still. He would piddle about the house fixing anything that did or did not need fixing. If he wasn’t tinkering on a car, he was grilling ribs and steaks that would feed an army for a week. His love for motors started at an early age as he loved to race dirt bikes and ride three wheelers. He even saved up his own money as a young teenager to buy his own three-wheeler, only to ride it off a 27-foot cliff! Scott was an outdoorsman and would often be found hunting or fishing. Growing up in Clinton, he met the love of his life at the age of sixteen, and oh how his life changed forever! After twenty-one years of marriage to Sonya, he still treasured their early Saturday morning drives together down the backroads, drinking sweet tea. Out of this love, Scott became a dad to Dylan and Conner. This man loved his boys with a deep passion and enjoyed instilling in them his love for the outdoors. He was so proud of the men they are becoming. He has blessed his sons by leaving a legacy of love behind by the way he loved their mother. He adored his wife Sonya and their two sons: they were his world and he was theirs. Scott left an indelible mark on everyone he met and will be remembered and missed by so many people. He was a devoted husband, loving father, beloved son, and faithful friend. He is survived by his wife Sonya Case and two sons Dylan and Conner of Raymond, his father Vernon Case and step-mother Karen McNair of Seminary and mother Annette Hales of Clinton, his brothers James Case of New Orleans and James Matthews of Kansas, brother-in-law Britt (Dori) Bullock and their three sons Gavin, Clay, and Brayden, and his niece and nephews April, Aubrey Lee, and Jamie Alford. He is preceded in death by his sister Tammy Alford and his beloved in-laws Sam and Margaret Bullock. Visitation will be at Wynndale Baptist Church in Byram, Mississippi, on Saturday, October 13, 2018 from 9:00 to 11:00 a.m. Funeral services will be held at Wynndale at 11:00. Graveside services will follow at Macedonia Baptist Church in Brookhaven, Mississippi.

Scott Case was no ordinary man, so his life cannot be adequately reflected upon in an ordinary fashion. If you ask anyone to tell you about Scott, they will promptly share how he was a generous man to a fault. He freely gave of his time, his... View Obituary & Service Information

The family of Mr. Scott Case created this Life Tributes page to make it easy to share your memories.

Scott Case was no ordinary man, so his life cannot be adequately...