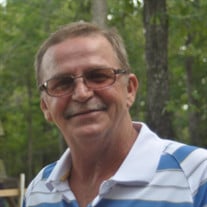 Rusty Melvin Dougherty, 62, passed away on Saturday, April 24, 2021. Visitation will be Wednesday, April 28, 2021 from 11:00 a.m. until the hour of the service at 1:00 p.m. at Chancellor Funeral Home in Byram, MS. Interment will follow at New Zion Baptist Church in Braxton, MS. Mr. Dougherty was born on September 24, 1958 to Charles and Carmen Smith Dougherty in Vicksburg, MS. He spent all of his life in Byram and owned and operated a flooring and carpet business. He was the life of family gatherings and was loved by family, friends, and neighbors. Along with his father, he was preceded in death by brother, Karl Dougherty and sister, Tina Dougherty. He is survived by his mother, Carmen Dougherty Andrews of Byram; daughter, Morgan Danielle Shiyou of Ocean Springs; brothers, Ray (Gale) Dougherty of Florence, Oscar (Joann) Dougherty of Vicksburg, and William J. (Jewel) Dougherty of Utica; sisters, Zita (David) Williams and Julie (Joe) Richardson, both of Vicksburg, Lita (Gary) Edwards of Lady Lake, FL, Penny Ike (Douglas) Eichwurtzle of Florence, and Sugar (Randal) Romedy of Mendenhall; and three grandchildren.

The family of Mr. Rusty Melvin Dougherty created this Life Tributes page to make it easy to share your memories.