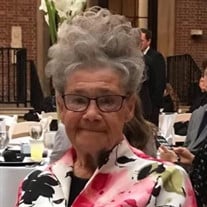 Ruby Herrington Watkins was born in Magee, Mississippi on August 04, 1930. She passed from this life on December 29, 2021 at the age of 91. Visitation will be held on Wednesday, January 05, 2022 at the First Pentecostal Church of Jackson from 10:00 a.m. until the hour of the service at 11:00 a.m. A graveside service will follow at 2:00 p.m. at Lakewood South Memorial Park in Jackson, MS. Ruby was preceded in death by her husband, Willie Frank Watkins; son, Reverend Carlton Watkins; and her son-in-law, Tim Brumfield. She is survived by two daughters, Sheila Brumfield of Jackson, MS and Diane Bowles (Greg Bowles) of Waveland, MS; one daughter-in-law, Penny Watkins of Dayton, OH; two grandchildren, Tiffany Smith (Rev. Bradley Smith) of Dayton, Ohio and Brooklea Jackson of Waveland, MS; six great-grandchildren; extended family; and a remarkable number of friends. She was affectionately known as “Aunt Ruby” to friends in the Pacific Northwest, the East Coast, and points in between. She stayed in touch with her friends and extended family members through daily text messages. She loved to send memes, jokes, and words of encouragement. Ruby loved people and made them feel special. And she also loved life. The day before she passed away, her daughter asked her, “Mamma, are you ready to see Daddy and Bubba?” She said, “Not yet.” Ruby loved baking cakes, pies, and making pickles and jelly. Ruby once made a batch of homemade pickles and the following week her daughter asked her where they were. Ruby said they didn’t have any. When asked why, Ruby said she gave them all away. Ruby never lost her sharp mind and memory, possibly due to the eight to ten books she read every six weeks. She traded books with friends and loved visiting bookstores. She also loved her daily coffee and Diet Cokes. Every morning while drinking her coffee, she would smile and say, “There is nothing like the first cup of coffee.” Ruby clutched a bottle of Diet Coke as the paramedics recently prepared to wheel her to the ambulance. A paramedic saw the brown liquid sloshing around in the bottle and told Ruby the drink would have to stay behind. She surrendered her Diet Coke but saw no valid reason why it couldn’t go with her in that $300,000.00 emergency vehicle. Ruby told Carlton one day, “Son, everybody has a talent, but not me.” Carlton asked, “How many cakes, pies, and meals do you think you have made for people throughout the years?” She said she had no idea, possibly hundreds. He said “Think of the people you have encouraged by taking time out to bake them something good to eat.” Ruby said, until then, she never thought of her cooking as a talent given to her by God to encourage others. For most of her life, Ruby was an active member of the First Pentecostal Church of Jackson, MS. She moved to Dayton, OH six years ago and is a member of the Apostolic Lighthouse Church pastored by her grandson-in-love, Reverend Bradley Smith.

Ruby Herrington Watkins was born in Magee, Mississippi on August 04, 1930. She passed from this life on December 29, 2021 at the age of 91. Visitation will be held on Wednesday, January 05, 2022 at the First Pentecostal Church of Jackson from... View Obituary & Service Information

The family of Mrs. Ruby Nell Watkins created this Life Tributes page to make it easy to share your memories.

Ruby Herrington Watkins was born in Magee, Mississippi on August...