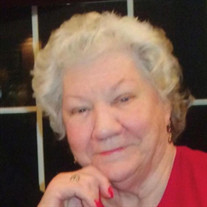 Rosemary ‘Rose’ Buynar Speir, 94, of Byram, unexpectedly went home to be with the Lord on January 29, 2021. Rose was a resident of Pine Crest Guest Home in Hazlehurst, MS. As a longtime resident of Byram, she graduated from Byram High School in 1944, where she was voted “Best Girl Athlete” and “Campus Favorite”. She also spent many years as an avid bowler. Prior to Pine Crest, Rose was a resident of Trace Pointe Retirement Center in Clinton. Her big heart and spunky personality made her a favorite there and she was crowned Miss Trace Pointe in 2003. She was loved by many at the facility because her joy was simply helping fellow residents. One would describe her greatest attribute in life was having a true servant’s heart. Anyone knowing that knew that she would never hesitate to take them in to meet their needs, whether large or small, and for as long as they needed. There would be no way to count the number of lives that she touched over the years. She was a longtime member of Byram Baptist Church where she raised her children. Rose had a great sense of humor and loved to crack jokes and was given the nickname the “Comeback kid” by her girls. She was bossy and never hesitated to say what was on her mind. Her laugh and smile were both so contagious. She loved having her hair styled, having her nails polished, wearing matching jewelry and was always ready for someone to take her out to eat. She was married to her one true love, the late Johnnie ‘Ray’ Raymond Speir who passed away at the premature age of 42. This tragedy left her to raise six daughters of which he always said “he would not trade one of his girls for a cow pen full of boys”. Raising her daughters was her proudest achievement in life and he would have been so proud of the job well done. Rose was preceded in death by her mother, Jennette Ainsworth Buynar; her husband Johnnie ‘Ray’ Raymond Speir; her daughter Sonia Speir Shaw; her brother James Buynar and her great-granddaughter Sophia Love McGuffee. She is survived by her daughters: Nita Blankenship (Phillip) of Birmingham, AL; Linda Barker (and the late Don Barker) of Gluckstadt; Marsha Pickard (Lamar) of Hazlehurst; Patsy Brewer (Kirby) of Hazlehurst; Brenda Moran (Garry) of Clinton; and dearly beloved sister-in-law’s, Faye Speir Wittmann of Byram, Bobbie Speir of Taylorsville and Shirley Speir Barber of Jackson. Rose is also survived by her precious grandchildren: Luke Pickard (Deanna); Micah Pickard (Kim); Laura Pickard Johns (Jay); Kynnedi Pickard; Amanda Stocks (Shane); Jessica Sones (Joey); Blake McGuffee (Emily); Ashley Moran Kairdolf (Wayne); Brian Lowman (Kandace); Trey Shaw; Dylan Shaw; Clay Baker (Susan); Charlie Grubb (Ashley) and Bethany Willis, as well as a host of great grandchildren. The family would like to thank Dr. Randy Hankins, Pine Crest Guest Home and Hospice Ministries, Inc. for providing care over our mother the last several years. Due to Covid-19, and in order to keep families safe, a private celebration of her life and legacy will be graveside at Lakewood Memorial Cemetery, in Jackson. In lieu of flowers, memorials may be made to Alzheimer’s Association or the Glioblastoma Foundation.

Rosemary &#8216;Rose&#8217; Buynar Speir, 94, of Byram, unexpectedly went home to be with the Lord on January 29, 2021. Rose was a resident of Pine Crest Guest Home in Hazlehurst, MS. As a longtime resident of Byram, she graduated from Byram... View Obituary & Service Information

The family of Rosemary "Rose" Buynar Speir created this Life Tributes page to make it easy to share your memories.