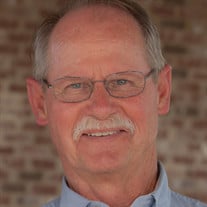 Ronald Lee “Bo” Rideout of Richland, MS, went to be with the Lord sometime early Wednesday morning May 29, 2019 in Destin, FL, on vacation with family. Visitation will be 12 noon until the 2pm funeral service Monday, June 3, 2019 at Chancellor Funeral Home in Byram. Interment will follow at Lakewood South. Mr. Rideout was born August 11, 1950 in Jackson, MS. He married Bonita Marcell Warren on May 20, 1972 in Brandon, MS. He worked as an Electrician for Fountain Construction from 1972 until retirement in 2012. He was a member of First Baptist Church of Richland and the International Brotherhood of Electrical Workers Local 480. Happiest in the woods, by a pond, at the drag strip or a baseball game, his infectious smile was greatest when he was with family. He was masterful at every endeavor, there wasn’t a tree in North America he couldn’t identify and no deer or bass was safe when he had a rifle or a rod & reel in his hands. Loving and devoted son, husband, brother, father and grandfather, there aren’t enough pages in the world to account for this man’s kindness, generosity, faith in Christ, wisdom, skills and the happiness he brought into the world. Mr. Rideout is greeted in Heaven by his father, Mr. George Emerson Rideout, mother, Elizabeth Pearl Roberts Rideout, brother, Johnny Earl Rideout and nephew, Timothy Dewayne Moss. Left to cherish his loving memory are wife, Marcy, sister, Georgette Rideout Bullock and husband Wes, brother, Billy Wrenn Rideout and wife Dianne, sister, Kathy Rideout Moss and husband Arthur, son, Ronald Lee Rideout, Jr. and wife Brenda, grandson, Evan Cole Rideout, and many in-laws, nieces and nephews. In lieu of flowers, please make donations to Blair E. Batson Children’s Hospital.Online guest book available at www.chancellorfuneralhome.com.

The family of Mr. Ronald Lee Rideout created this Life Tributes page to make it easy to share your memories.

Ronald Lee “Bo” Rideout of Richland, MS, went to be with the...