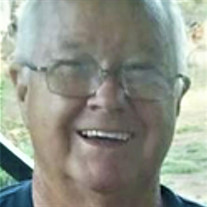 Ronald Stanley Jones left this world on Wednesday, December 09, 2020 at St. Dominic Hospital with Pam Kister Jones, his wife of 42 years, by his side, along with his children, Kimberly Jones and Kevin Jones and his sisters, Ann Dean and Lydia Parker. Visitation will be Friday, December 11, 2020 at Terry Cemetery from 10:00 a.m. until the graveside service at 11:00 a.m. Pallbearers will be Stephen Jones, Boo Cohn, Israel Mendez, Richard Lee Sims, Hunter McKinley, and Jason Sanders. Ronnie was born December 21, 1944 in Meridian, MS to parents, Wilson Danvis Jones and Thelma Marie Ginn Jones. Anyone that knew Ronnie knew he loved sports. After playing in high school, he went on to play football and baseball at East Mississippi Junior College in Scooba, MS. His biggest joy was showing off his children and grandchildren while celebrating their 50th anniversary of their State Championship in Baseball. One of his favorite past-times was watching and talking about the Ole Miss Rebels. Ronnie began his 42-year tire career in 1978 and for the last 35 years, was the owner/operator of R&R Tire, formerly Jones Truck Retreading, along with his son. Above all, Ronnie will be remembered for his love for his children and grandchildren. He never missed anything the grandchildren were involved in. If you wanted to know where the fish were biting, just ask Ronnie because he and Kevin spent long hours together at the lake in competition to see who could catch the most and biggest. Ronnie is survived by his wife, Pam; daughter, Kimberly Jones; son, Kevin Jones; sisters, Ann Dean (Walter), Lydia Parker (John), and Margaret Trest; grandchildren, Mallory Pender and John Wilson Pender; sisters-in-law, Claudia Burleson (Jerry) and Nancy Cohn; and numerous nieces and nephews. Along with his parents, he is preceded in death by his brothers, Danvis Jones, Frances Jones, Harold Jones, Billy Jones, and Robert Jones; his father-in-law, Tommy Kister; and brother-in-law, Mike Kister. Memorials may be made in memory of Ronnie and in honor of his grandson, John Wilson Pender to Shriner Hospital at 4400 Clayton Ave. St. Louis, MO 63110.

Ronald Stanley Jones left this world on Wednesday, December 09, 2020 at St. Dominic Hospital with Pam Kister Jones, his wife of 42 years, by his side, along with his children, Kimberly Jones and Kevin Jones and his sisters, Ann Dean and Lydia... View Obituary & Service Information

The family of Mr. Ronald Stanley Jones created this Life Tributes page to make it easy to share your memories.