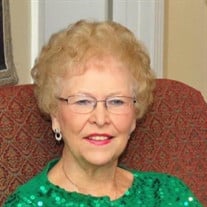 Robbie Nell Hartley Berry, 83, passed away on Sunday night, April 19, 2020 at MS Methodist Rehab in Jackson after a short battle with cancer. There will be a private family service at Chancellor Funeral Home in Byram on Tuesday, April 21 at 2:00 p.m. with a graveside service to follow at Hopewell Baptist Church Cemetery. Mrs. Berry was born in Vardaman, MS on May 25, 1936 to Rev. Douglas Cooper Hartley and Sue Spikes Hartley. She is predeceased by her husband of 53 years, Jerry Lee Berry, her parents and her in-laws, Henry W. Berry and Verna Lee Berry. Mrs. Berry graduated from Clarksdale High School in 1954. She graduated from Ole Miss in 1958 with a degree in Education and Library Science and then finished her Master’s in Education and Library Science from Mississippi State in 1977. She was a librarian in the Jackson Public Schools from 1958-1996 at Murrah High School, Callaway High School, and Whitten Junior High School. Mrs. Berry touched the lives of many students during her years of service and developed many lifelong friends among the teachers and students. Robbie met her husband, Jerry Lee Berry, another educator, in 1961 and they married on March 12, 1961, and celebrated 53 years of marriage. To this union were born two sons, Doug and Kevin. Robbie enjoyed traveling and she and Jerry took their children to visit many places in the United States. After retirement they continued their travels until his health declined. After his death, she continued to travel with her sister and brother in-law (Pat and Rainey Little) and other lifelong friends and Sunday school members. Mrs. Berry was a member of Brandon Baptist Church in Brandon. She was a very active participant, choir member and Sunday school teacher during her life at Wynndale Baptist Church in Byram and Woodville Heights Baptist Church in Jackson. Mrs. Berry is survived by her sons; Charles Douglas Berry (Shannan) of Peachtree City, GA and Kevin Lee Berry (Michelle) of Brandon, MS. She is survived by six grandchildren, Brannon Lee Berry (Ashley) of Gluckstadt, MS; Brittany Jeanell Patrick (Chris) of Brandon, MS; Jackson Parker Berry of Pensacola, FL; Mills Cooper Berry, Burke Lowery Berry and Kell Douglas Berry of Peachtree City, GA and three great-grandchildren, Gunner Lee Berry and Timothy Grayson Berry of Gluckstadt, MS and Mollie Reid Patrick of Brandon, MS; two sisters, Pat Little (Rainey) and Dorothy Phillips (Bill) of Starkville, MS; and many nieces, nephews and cousins. Memorials may be made to the Samaritan’s Purse, St. Jude Children’s Hospital and the MS Chapter of the Alzheimer’s Association.

Robbie Nell Hartley Berry, 83, passed away on Sunday night, April 19, 2020 at MS Methodist Rehab in Jackson after a short battle with cancer. There will be a private family service at Chancellor Funeral Home in Byram on Tuesday, April 21 at... View Obituary & Service Information

The family of Mrs. Robbie Nell Berry created this Life Tributes page to make it easy to share your memories.