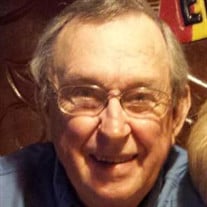 Richard L. Lovelace, 83 of Jackson, Mississippi passed away Saturday, March 2, 2019 at home after a brief illness. Visitation is 5pm-7pm March 5, 2019 at Chancellor Funeral Home in Byram and again 10am Wednesday, March 6, 2019 at Alta Woods United Methodist Church. Funeral services are 11am Wednesday at the church with interment in the Mississippi Veterans Cemetery in Newton, MS at 2:30pm Richard was born in Jackson, Mississippi on April 18, 1935. He graduated from Central High School and attended the Kentucky Military Institute in Lyndon, Kentucky. In 1955, he enlisted in the US Army serving 3 years and 11 days. In 1958 he began work in his family business, Mississippi Specialty Advertising, where he worked for 30 years until the company closed in 1978. He then formed the Lovelace Agency where he served as an independent insurance agent until his retirement. In 1977 Richard married the love of his life, Pat Loftin Lovelace. They established their blended family and added to it two years later with a son and that created a beautiful family in the truest sense of the word. Richard grew up in Central Presbyterian Church and later attended First Presbyterian Church. However, for the last 42 years his home church has been Alta Woods United Methodist Church. His love for the Lord was evident in the many ways he served through teaching youth, young adults and adults as well as serving on various committees. Since 2013 he has followed Christ’s example of service by delivering meals prepared by ladies in the church to members of Alta Woods who could no longer prepare meals for themselves. Not only did he deliver meals but he became their handyman and expert listener. He was selfless in this service. Richard Lovelace was a man who loved well and unconditionally. He loved his children, grandchildren, great grandchildren, nieces, nephews, and friends. He was an avid hunter and fisherman and taught all his children the love of the outdoors which has been passed down through the generations. For many years, he and Pat hosted family get-togethers at their house on Swan Lake for July 4th and Thanksgiving celebrations. These times of celebrating family, fishing, swimming, boating, fireworks and love were so special to him. Richard was also a woodworker who crafted beautiful wooden strip canoes. As was his way, he made each of his five children a custom canoe for their families to enjoy. This labor of love has also been passed along to his heirs. Richard is preceded in death by his parents, Johnnie L. and James L. Lovelace and grandson, Joseph Tillman. He is survived by his wife: Pat L. Lovelace, his children: Rick Lovelace, Lynn Lovelace Wilson (Randy), Bea Lovelace Tillman (Collier), Todd Massey (Emily), J. Davis Lovelace (Lacey), twelve grandchildren: Jim Lovelace (Ashleigh), Josh Lovelace (Alexis), Anna Wilson Koke (Ben), Caleb and Sarah Beth Wilson, Carty Tillman (Ashley), Bethany Tillman, Sarah Kate, Caroline, and Jack Massey, and Lana Rose Lovelace and three great-grandchildren: Hunter and Macie Lovelace and Josephine Tillman (due in April) . Pallbearers will be members of The Lovelace Sunday school class whom he taught and loved for so many years: Phillip Pardue, Greg Lewis, Brad Lewis, Kyle Lewis, Jacob Lewis, David Martin, Charlie Weathersby In lieu of flowers, memorials may be given to Mississippi State University Joseph Tillman Endowed Scholarship PO Box 6149 MS State, MS 39762 or Big Heart Orphanage, PO Box 746 Pharr, TX 78577 in memory of his beloved Joseph. The Lovelace family wishes to extend our sincere thanks to Fran and Brad Lewis for their loving spirit and professional care extended to Richard during his hospitalization and the following days at home.

The family of Mr Richard Lovelace created this Life Tributes page to make it easy to share your memories.