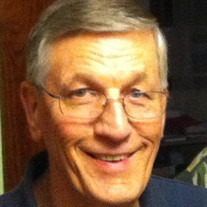 Ertha Ray Buchanan went to be with his Savior on October 11, 2018. Ray was born in Scott County on March 17, 1947 to Katie Warren Buchanan and Ertha “Buck” Buchanan. He grew up in Jackson, MS a city he would spend the majority of his life keeping fresh paint on its may buildings while working as a painter for the City of Jackson Care and Maintenance Department. After graduating from Central High School in 1966, Ray joined the United States Air Force where he was stationed in Thailand as an aircraft mechanic. After serving four years in the USAF, he returned the Jackson to marry the love of his life, Janie Ann Callender and settled in the burgeoning South Jackson area. Eventually they settled in the Forest Hill area where he raised two sons and passed along his love of sports and outdoor activities. Ray was proud of where he was born and raised. He spent summers with grandparents in both Scott and Forrest County, just north of Camp Shelby and spoke fondly of the memories. Ray was also proud of his service to his county and never failed to speak of it to others while also thanking current service members for their service in often impromptu conversations. He enjoyed sharing stories with them along with others. Ray was proud of both his sons for their accomplishments, often sharing stories with strangers or anyone who would listen. Ray made a profession of faith and was baptized at the age of 10 at Griffith Memorial Baptist Church, then located in the Battlefield Park area. He served as Deacon at Byram Baptist Church, where he was a bus driver, a Sunday school teacher, choir member and occasional soloist. Ray also served as a greeter and usher for the past 18 years at First Baptist Church of Jackson. Church was an important part of his life, hardly missing an opportunity to go, serve, and share a smile with everyone along the way. Ray Buchanan will be remembered for his warm smile, his eagerness to share, his willingness to help and his loving spirit. He was preceded in death by his parents Katie Warren Davis (Fred) and Ertha Buchanan (Mavis). Ray is survived by his wife of 46 years Janie Buchanan, his sons, Matthew Buchanan (Jariel) and Andrew Buchanan, grandson, Bryce Buchanan and his brother, Pat Buchanan (Trisha). The Buchanan family extends the sincerest and deepest appreciation to Mississippi Home Care and Baptist Hospice. In Lieu of Flowers, please make donations to the following ministries of First Baptist Church of Jackson that were dear to Ray’s heart: Carols by Candlelight, Lottie Moon Christmas Offering, ARISE Campaign. Visitation will be held at Chancellor Funeral Home in Byram on Friday, October 12 from 5-8pm. Funeral Services will be Saturday, October 13 at 11am in the Chapel of First Baptist Church of Jackson with a visitation at the church from 10-11am. Interment will follow at Lakewood South.

Ertha Ray Buchanan went to be with his Savior on October 11, 2018. Ray was born in Scott County on March 17, 1947 to Katie Warren Buchanan and Ertha &#8220;Buck&#8221; Buchanan. He grew up in Jackson, MS a city he would spend the majority... View Obituary & Service Information

The family of Mr. Ray Buchanan created this Life Tributes page to make it easy to share your memories.

Ertha Ray Buchanan went to be with his Savior on October 11,...