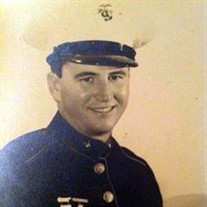 Born August 13, 1920 in Union Church, Mississippi, Quentin was the youngest of 8 children blessed to the union of James Thomas and Effie Catherine (Flowers) McCall. Quentin would eventually play football for the Jefferson County A.H.S. On October 2, 1940—the Clarion Ledger reported that “UNION CHURCH WINS 54 to 0”, citing Quentin McCall and Harold West as “the main cogs on in the Jefferson machinery”. “McCall ended the final quarter with a spectacular 45 yard touchdown”, the article ended. After enlisting on May 7, 1942 at the state recruiting station in Jackson, Mississippi, the Sunday’s Clarion-Ledger reported that that weekend’s sixteen new leathernecks – including the 21-year-old McCall of Kings Hotel – were headed straight to Marine Corps Base, San Diego for basic training. That October, they departed west into the Pacific Theater. They would spend a little over two months in the warm embrace of New Zealand, shipping out for the Solomon Islands the day after Christmas. Quentin and his unit celebrated New Year’s Eve en route, but within days landed on Guadalcanal - there to help replace elements of the 1st Marine Division. A little over a month later, they began embarking on ships for movement back to New Zealand for some R&R and to prepare for their next orders. Corporal McCall was with his brothers in India Company, 3rd Battalion of the 6th Marines (I-3/6) when they landed on Betio as part of Operation: GALVANIC. They had landed late in the day on D+1, reinforcing units already fighting there. The mission of the 2nd Marine Division was to secure the island in order to control the Japanese airstrip in the Tarawa Atoll; thereby preventing the Japanese Imperial forces from getting closer to the United States, and enabling US forces to get closer to mainland Japan. It would become one of the bloodiest battles in the Corps history. It was November 23, 1943 (D+3 for the “Battle of Tarawa”) when young Quentin – just 23 years old – perished. He was reportedly soon buried in Cemetery 33 on Betio Island - a temporary location chosen by his fellow Marines, the survivors of the battle, until the Fallen could be recovered and returned to their families. Having a loved one away from home during the holidays is always trying; however, having a son or husband off fighting in the war left the whole family on edge. The fact that this battle took place just before Thanksgiving meant that most of the families, who had unknowingly earned their Gold Star, would receive their heart-wrenching telegrams on Christmas Eve – some Christmas Day or even New Year’s Day. Despite the heavy casualties suffered by U.S. forces, military success in the battle of Tarawa was a huge victory for the U.S. military because the Gilbert Islands provided the U.S. Navy Pacific Fleet a platform from which to launch assaults on the Marshall and Caroline Islands to advance their Central Pacific Campaign against Japan. In the immediate aftermath of the fighting on Tarawa, U.S. service members who died in the battle were buried in a number of battlefield cemeteries on the island. The 604th Quartermaster Graves Registration Company conducted remains recovery operation on Betio between 1946 and 1947, but CPL McCall’s remains were not identified. All of the remains found on Tarawa were sent to the Schofield Barracks Central Identification Laboratory for identification in 1947. By 1949, the remains that had not been identified were interred as UNKNOWNS in the National Memorial Cemetery of the Pacific (NMCP, known as "the Punchbowl"), in Honolulu. On July 2, 1944, a memorial service was held at the Methodist church. Reverend Ulmer officiated, assisted by a chaplain from one of the army camps. Officers and enlisted from Jackson's Marine Corps recruiting office solemnly joined Quentin’s family. Left to mourn his passing were his parents and siblings; Gladys, James William, Jennie Maye, Marvie Ethel, Susie Anna, Thomas Jefferson and Carroll. In October of 2013, Jennifer Morrison, independent volunteer forensic genealogist, found the family of CPL McCall and put them in contact with the Marine Corps POW/MIA Section. This (re)established lines of communication with Quentin’s family regarding the ongoing recovery and repatriation efforts, and offered his nephew (and namesake) the opportunity to provide a Family Reference DNA Sample, should it be necessary for his Uncle Quentin's identification. In March 2019, History Flight, under contract with the Defense POW/MIA Accounting Agency, notified the DPAA that they discovered a burial site on Betio Island and recovered the remains of what they believed to be missing American service members who had been buried in Cemetery #33. The remains were accessioned into the DPAA laboratory for analysis. On September 27, 2019, the Defense POW/MIA Accounting Agency (DPAA) identified the remains of Private First Class Quentin Weldon McCall, and his family received “The Call” from the Marine Corps POW/MIA Section with the good news. On October 9, 2019, the DPAA officially announced to the world that PFC McCall was coming home. Scientists used circumstantial evidence and laboratory analyses to identify PFC McCall from among the recovered remains. Marine Corps Corporal Quentin Weldon McCall is memorialized among the National Memorial Cemetery of the Pacific's Honolulu Memorial. Although he has now been recovered and identified, CPL McCall's name shall remain permanently inscribed on Court 4 of the "Courts of the Missing". A rosette will be placed next to his name to indicate that Quentin has finally been found. A visitation will be held on Sunday, October 24, 2021 at Chancellor Funeral Home in Byram, MS from 2:00 p.m.—4:00 p.m. CPL Quentin McCall will be laid to rest on Monday, October 25, 2021 at the Mississippi State Veterans Memorial Cemetery in Newton, MS with full military honors. Procession will begin at the funeral home at 9:00 a.m.

Born August 13, 1920 in Union Church, Mississippi, Quentin was the youngest of 8 children blessed to the union of James Thomas and Effie Catherine (Flowers) McCall. Quentin would eventually play football for the Jefferson County A.H.S. On October... View Obituary & Service Information

The family of CPL Quentin Weldon McCall created this Life Tributes page to make it easy to share your memories.