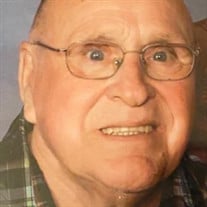 Paul David Oswalt, 81, passed away on Thursday, October 08, 2020 at his home in Terry, MS. A graveside service will be held at 3:30 p.m. on Sunday, October 11, 2020 at Lakewood South Memorial Park in Jackson, MS. Mr. Oswalt was born to Obie Doyle Oswalt and Edna Fulgham Oswalt on February 22, 1939 in Choctaw County, MS. A long-time resident of Jackson, he had lived in Terry for the past 20 years and was employed in sales at Sears for 42 years. He was a member of Wynndale Baptist Church. David was a family man who enjoyed going to his kid’s games. He loved working in the yard and grilling. He could cook a great hamburger. Along with his parents, he is preceded in death by his grandson, Justin Pranger. He is survived by his loving wife of 59 years, Virginia Oswalt; daughters, Davida (Ron) Pranger of Brownstown, IN and Paula (Kyle) Edwards of Byram; sons, Johnnie Oswalt of Terry and Edward Oswalt of Clinton; grandchildren, Chad, Kelsey, and Chase Oswalt, Zachary and Derek Pranger, Hannah Wilkins, Hayden and Hollyn Oswalt, and Cassidy and Logan Edwards; sister, Mozette (Leroy) Warren of Terry; and brother, Gerald (Nelda) Oswalt of West Point.
To order memorial trees or send flowers to the family in memory of Mr. Paul David Oswalt, please visit our flower store.