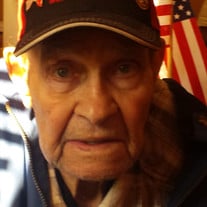 Paul C. Jones, 87, passed away Friday, May 25, 2018 at the VA Medical Center in Jackson. Visitation will be Wednesday, June 6 from 10:00 a.m until 11:00 a.m. at Chancellor Funeral Home. A graveside service will follow at Florence City Cemetery. Paul was born in Memphis, TN on October 01, 1930. He had resided in the Florence area for over 50 years. Paul was a member of First Baptist Church in Florence and was a Mason. He worked as a crane mechanic and traveled the world with his job. Paul liked to collect souvenirs from his travels. He adored Wanda, his wife of over 60 years, he raised two daughters and six grandchildren. Mr. Jones was preceded in death by his parents and his wife, Wanda. He is survived by his daughters, Paula (Gerald) Keys of Jackson and Jamie Jones of Jackson, grandchildren, Brandy Aycox, Corey Keys, Courtney Jones, Russell Jones, Melissa Jones, Ian Jones, Zoey Jones, Dakota Jones, and Kyle Wilhelm as well as six great grandchildren.
To order memorial trees or send flowers to the family in memory of Mr. Paul C. Jones, please visit our flower store.