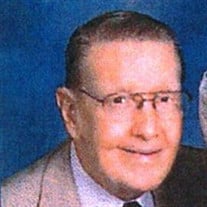 Owen William ‘Buddy’ Byrd passed peacefully from this life surrounded by his loving family and woke up in Heaven early Friday morning, May 22, 2020. Due to COVID-19, the family held a private service. Buddy was a loving husband, father, grandfather, and great-grandfather. He proudly served our country during WWII in the United States Army Air Corps for which he received several medals of honor. During his service in the military, his duties took him to South America, Africa, China, Burma and India before returning home to his family in 1946. After returning home from the service, he managed, then later owned and operated Smith’s City Shoe Shop in Jackson MS until his retirement. Buddy loved playing golf with his many friends and he and Maxine were avid fishermen. Buddy was a long-time, faithful member of Parkway Baptist Church in Clinton MS, serving as deacon, the senior adult choir member, and an usher. He was one of the few who could be called a ‘true Southern Gentleman’. Among his many admirable qualities were his belief in the old gentle ways, his soft-spoken nature, his many kindnesses to family and friends, and his selfless and honest nature. All of these traits made Buddy well-known and loved by his family, many associates and friends. Buddy was preceded in death by his parents, Virgie B. Dorchester and Ellis E. Byrd; the mother of his children, Maxine D. Byrd; his second wife, Bettye O. Byrd; and his sister, Eugenia B White. More than all things worldly, he loved his family and was proud of the legacy he leaves behind: daughter, Evelyn B. McAlpin of Florence; sons, Douglas O. (Vickie) Byrd of Brandon and Thomas E (Doug) Byrd of Orlando, FL; grandchildren, Michael (Sandy) McAlpin, Lisa Evans, Heather Dale, and Doug (Jamie) Byrd Jr.; great-grandchildren, Dylan and Evan McAlpin, Haley Moore, Trevor Dale, Sage Devereaux, Sunnie and Marley Byrd; and step-children, Cynthia (Jerry) Acy, Susan (Robert) Harrison, Johnny (Nita) Outlaw and numerous grand and great grandchildren.

Owen William &#8216;Buddy&#8217; Byrd passed peacefully from this life surrounded by his loving family and woke up in Heaven early Friday morning, May 22, 2020. Due to COVID-19, the family held a private service. Buddy was a loving husband,... View Obituary & Service Information

The family of Mr. Owen Byrd created this Life Tributes page to make it easy to share your memories.