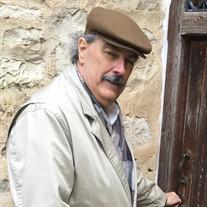 Nicholas William Tremonte, 67, went to be with the Lord he loved on Friday, August 24, 2018, at his home in Byram. Visitation will be 2-5pm Sunday, August 26, 2018 at Chancellor Funeral Home in Byram. Services will be 10am Monday, August 27, 2018 in the funeral home chapel. Nick was born on September 18, 1950, in Lake Charles, Louisiana, to Veto and Elaine Tremonte. He graduated from Landry High School in 1968, entering the Navy shortly thereafter. He attended Louisiana State University, graduating in 1976 with a degree in Finance. Nick lived in Byram for the past 29 years, after living in Baton Rouge. Nick was raised in his Sicilian grandparents’ bakery; his earliest memories of the bakery were standing on a kitchen chair at the work table. He grew and learned the trade until he became a master baker. The Tremonte’s Liberty Bakery supplied all of the bread for southwest Louisiana and southeast Texas every year for St. Joseph Day, March 19, a traditional Sicilian holiday. Nick excelled at many jobs over the years. He was a welder, bank manager, and Mac Tools Distributor and Sales Manager. He owned his own business, Custom Tailoring in Jackson, and then returned to his finance roots as a stockbroker for the last 20 years of his career. He also served as Interim Mayor of Byram for over 12 years until its reincorporation in 2009, and then served as Mayor for four years. According to a municipal finance expert, the City of Byram accomplished more in three years of Nick’s leadership than any newly-incorporated city in recent memory. Nick was a Renaissance Man. He was well read and could converse about most subjects from farming to cars to political philosophy to great works of art. His favorite artist was Caravaggio, and he personally designed his last home based on classical Italian architecture. One of Nick’s favorite titles was ‘Fixer Man,’ given to him by his grandson because he was known to repair whatever was broken. He was as comfortable in a suit and tie at the Governor’s Mansion as he was in overalls at the hardware store. Nick loved to travel, especially to his beloved Sicily. He enjoyed the island’s history, customs, and food, eating Sicilian pasta, seafood, and bread from coast to coast. He had a special affinity for sfingis (Sicilian donuts). He also loved old country music, opera and Southern gospel. Many times, Nick and Tahnya sang “Sweet Thang” with Ernest Tubb and Loretta Lynn while riding the highways. Nick’s most treasured times, though, were those spent with his family. Their cruise to Alaska last year was a highlight of his life. There was a twinkle in his eye and a smile on his face when he knew his sons were coming to visit. He cherished his grandson, Michael. Nick was also a loyal friend. Nick searched for God all of his life, finding a personal relationship with Jesus Christ at the age of 23. He endeavored to serve God and honor Him in everything he did until the day he died. Preceded in death by his parents and his brother, Victor Robert Tremonte, the family is now reunited. Nick, called Buddy by his family, is survived by his wife, Tahnya Simmons Tremonte; two sons, Victor Benjamin Tremonte and wife Molly, and Anthony Nicholas Tremonte and wife Jocelyn; one grandson, Michael Nicholas Tremonte; a granddaughter Rosemary Elaine Tremonte who will be born in September, and a host of relatives and friends. In lieu of flowers, memorials may be made to French Camp Academy to the Victor and Nicholas Tremonte Scholarship Fund. ‘For I know the plans I have for you,’ declares the LORD, ‘plans to prosper you and not to harm you, plans to give you hope and a future.’ Jeremiah 29:11

Nicholas William Tremonte, 67, went to be with the Lord he loved on Friday, August 24, 2018, at his home in Byram. Visitation will be 2-5pm Sunday, August 26, 2018 at Chancellor Funeral Home in Byram. Services will be 10am Monday, August 27,... View Obituary & Service Information

The family of Mr. Nicholas "Nick" William Tremonte created this Life Tributes page to make it easy to share your memories.

Nicholas William Tremonte, 67, went to be with the Lord he loved...