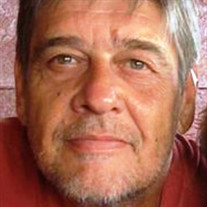 Michael “Mike” James O’Flarity, 72, passed away on Wednesday, June 10, 2020 at MS Baptist Medical Center. The family will accept visitors from 12:00 p.m to 1:45 p.m. on Saturday, June 13, 2020 at Chancellor Funeral Home in Byram with a graveside service to follow at 2:00 p.m. at Terry Cemetery. Mr. O’Flarity was born to James P. O’Flarity and Martha Jean Alford on Decemter 05, 1947 in Jackson, MS. A life-long resident of Hinds County, Mike graduated from Byram High School in 1966 where he played football and was an all-star in baseball. While in school, he also met and later married the love of his life, Edna Wilson. After graduation, Mike served in the National Guard and later worked as a computer operator for Jitney Jungle. Mike was an avid outdoorsman who greatly enjoyed hunting and fishing, Nascar, and MS State Sports. Along with his parents, he was preceded in death by his step-father, Jimmy Frizzell; step-mother, Betty O’Flarity; and sister, Pam O’Flarity . He is survived by his wife of 52 years, Edna O’Flarity; son, Kevin Michael (Jennifer) O’Flarity of Brandon; daughter, Christie (John) O’Flarity Davis of Byram; brother, Steve (Linda) O’Flarity of Florida; sister, Debbie (Tommy) James of Byram; five grandchildren, Colby, Colin, Blake, Kade, and Matt; extended family and a host of friends; and his Yorkie, Rascal. Donations may be made to St. Jude’s Children’s Hospital. Online guestbook may be signed at chancellorfuneralhome.com.

The family of Mr. Michael James O'Flarity created this Life Tributes page to make it easy to share your memories.