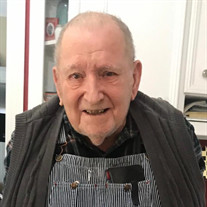 Clyde “Melvin” Gilmore, 92, passed from this earth to meet his Lord and Savior on Thursday, November 19, 2020, at his daughter’s home where he had lived with his precious wife, Sara, for the past two and a half years. The family will receive friends for visitation on Tuesday, November 24th from 10:00 a.m. until the 11:00 a.m. funeral service at Chancellor Funeral Home in Florence. Burial with Military Honors will follow at Lakewood Memorial Park in Jackson. Melvin was born on February 19, 1928, in Sebastopol, Mississippi as the third of eight children of Lee and Maude Gilmore. He grew up in that small community until he left to go to the Navy in 1946. Before leaving for the service he met his to-be bride, Sara Sansing, who told him, “I will wait for you.” And, she did for two years while he served on the island of Guam. When he returned from active duty in early January of 1948, they did not waste time getting married. They were married on January 24, 1948 and had an amazing 72 years together. Melvin had various jobs during his lifetime, including selling dry good door-to-door back in the 1950s, being a clothing store manager, selling some of the first metal windows as a salesman for Mississippi Metal Products, as part owner of Pearl Building Supply, and as construction superintendent for his brother’s construction/real estate company. He finally retired from working at 80 years of age. Melvin loved to have a vegetable garden and beautiful flowers. With his garden harvests he gladly shared the abundance with others and he was always more than happy to share any of his flowering plants with those who might want a “start.” You knew he was content and happy when he whistled, which was often. He deeply loved his family, his friends, but most of all his Lord. Along with his parents, he was preceded in death by his wife, Sara; his brothers Montell Gilmore and Wendell Gilmore; his sisters, Cujette Hood and Margie McDiarmid. He is survived by his two children, Jerry Gilmore (Teresa) of Burbank, CA and Vickie Neely (Keith) of Florence MS; three grandsons, Lee Gilmore (Rachelle) of Burbank CA, Bryce Neely (Shelley) of Bluffton SC and Kyle Neely of Florence; great-grandchildren, Molly Gilmore, Logan Gilmore, Wyatt Neely and Wren Neely; brothers, George Gilmore, James Gilmore, and Kenny Gilmore; numerous nieces, nephews, extended family, and a host of friends. In lieu of flowers, donations may be made to First Baptist Church Florence Lottie Moon Christmas Offering.

The family of Mr. Melvin Gilmore created this Life Tributes page to make it easy to share your memories.

Clyde “Melvin” Gilmore, 92, passed from this earth to meet his...