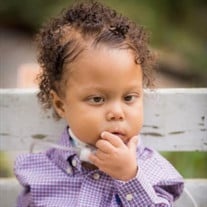 McKinley Alexander Rushing, 4, passed away at the University of Mississippi Medical Center on April 5, 2021, surrounded by his loving family and went to be with the Lord in his Heavenly home. Visitation will be Monday, April 12 from 5:00 – 7:00 pm at Chancellor Funeral Home in Byram, MS. Service will be held on Tuesday, April 13 at 11:00 at Chancellor Funeral Home Byram, MS with interment following at Greater Richmond Grove Memorial Gardens, Richmond Grove M. B. Church in Jackson, MS McKinley was born on December 14, 2016 to Daniel O. and Keira R. Rushing. McKinley was a fighter and fought an uphill battle for all of his young life until Jesus called him home to free him from all of his health issues and problems. To know him was to love and adore him. From his beautiful brown eyes to his contagious smile he was sure to have you wrapped up and warrant a special place in your heart. He dearly loved his Daddy, Mama and older sister who stood by him and cared for him. It was evident early on in his young life that he would be a car guy as long as it was a Corvette like his Daddy’s. He loved practicing his driving skills with his steering wheel with gear shifter and horn. There was never any doubt in anybody’s mind that he was driving a Corvette. He also loved his music with his favorite song being Tennessee Whiskey. He is survived by his father, Daniel O. Rushing, mother, Keira R. Rushing; his sister, McKenzie A. Rushing; grandfathers, Danny O. Rushing, Ray Charles Brown, and Roderick Cage; grandmothers, Beverly G. Rushing and Christie L. Cage; and great-grandmothers, Eloise Thornton, Christine Minor and Joan Crawford. He is also survived by uncles, Nathaniel Rushing (Joanna), D’Cha’Ray Brown (Keuna), and Charles Brown (Deatrice); Aunt, Krysta Davis; and a host of cousins. The family is forever grateful to the Doctors, Nurses, Care Givers and Staff at the University of Mississippi Medical Center, as well as Faith and Friends Home Health Agency for their care, attentiveness, and thoughtfulness throughout McKinley’s abbreviated life.
To order memorial trees or send flowers to the family in memory of McKinley Alexander Rushing, please visit our flower store.