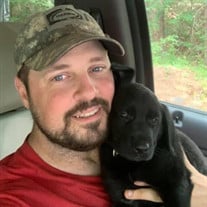 Matthew Lee Wilder, 36 of Florence, MS, died unexpectedly on February 7, 2022. The family will receive friends for visitation on Thursday, February 10th from 5:00 – 8:00 p.m. The funeral Service will be Friday, February 11th at 2:00 p.m. with visitation one-hour prior to the service all at Chancellor Funeral Home in Florence. Burial will follow in the Garden of Memories. Matthew was born March 11, 1985 the son of Daniel and Janice Wilder. He graduated from Florence High School in 2003 and Jackson State University in 2009. He loved his daughter, Paisley with all his heart. He was always laughing and joking with anyone he was with. He loved his family and friends, and his dogs and was deeply loved in return. He will be forever missed until we are together again. Matthew was preceded in death by his grandparents, Daniel and Ruth Wilder and Lee and Mary Avilla. He leaves behind his daughter, Paisley Wilder; parents, Dan and Janice Wilder; brothers, Michael Wilder and Danny Wilder; sister, Nicole Wilder Grantham; sister-in-law, Jessica Mayne Wilder; brother-in-law, Darin Grantham; Paisley’s mother, Tiffany Bennett and her husband, Henry; nephews, Chandler and Wyatt Grantham, Malachi Wilder; and Beck Bennett; nieces, Madison Grantham, Daylee and Kendall Wilder, Carter, Evelyn and Emerson Wilder, and Charley Bennett; and his girlfriend, Ashley Koestler all of Florence. Online guestbook may be signed at www.chancellorfuneralhome.com.

The family of Mr. Matthew Lee Wilder created this Life Tributes page to make it easy to share your memories.