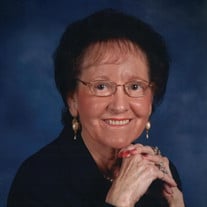 Dorothy Marie Johnson, 89, passed away on Thursday, April 29, 2021. Visitation will be held Tuesday, May 4 from 12 noon until the 2:00 p.m. service at Chancellor Funeral Home in Byram. Interment will follow in Pilgrim’s Rest Cemetery, Crystal Springs, MS. A resident of Byram for the past 35 years, Marie was born on April 16, 1932 to Alfred Deanon Henderson and Ollie Paris Davis Henderson in Brookhaven, MS and grew up in Lucien, MS. She was a member of Country Woods Baptist Church. Marie loved to travel with her late husband, Glen C. Johnson. She also loved preparing large meals and hosting her family and friends in her home. She had an eye for interior design and utilized her gifts to bless family, friends, and strangers. Her heart’s desire was to live out the Lord’s commandment to love Him and others. She not only showed it with her words but she lived it out with action. Her compassion for the needs of others was indescribable to her final day on this earth. She was preceded in death by her husband of 36 years, Glen C. Johnson, her parents Deanon and Ollie Henderson, Aunt Minnie Henderson; siblings Marion Henderson, James Henderson, Lula Henderson, Mildred Moore, and Ruby Ratcliff. Marie leaves to cherish her memory two sons: Junior McGehee and Garry McGehee both of Brookhaven, MS; one daughter: Theresa Brown of Canton, MS; two stepsons: Mike Johnson of Terrell, TX and Steve Johnson of Forney, TX; grandchildren: Tina Wirt of Ellettsville, IN, Jamey Harrell of Florence, MS, Jessie Harrell of Brandon, MS, Kristy Hawthorn of Lumberton, MS, Christopher McGehee of Natchez, MS, and Erik McGehee of Brookhaven, MS; step-grandchildren: Lindsey Garrett of Garland, TX, Chad Johnson, and Clint Johnson of Forney, TX; great-grandchildren: Jamie McGehee, Kalyn and Kennis Hawthorn, Abigail, Brooklyn, and Chloe Wirt, Madison and Brandon Miller, Bryce McGehee, and Mayleigh Harrell; one sister: JoAnn Rutland of Byram, MS; three sisters-in-law: Lee Sharp of Crystal Springs, Georgia Henderson of Natchez, MS, and JoAnn Henderson of Bartow, FL; numerous nieces, nephews, other relatives, and many friends.

Dorothy Marie Johnson, 89, passed away on Thursday, April 29, 2021. Visitation will be held Tuesday, May 4 from 12 noon until the 2:00 p.m. service at Chancellor Funeral Home in Byram. Interment will follow in Pilgrim&#8217;s Rest Cemetery,... View Obituary & Service Information

The family of Mrs. Marie Johnson created this Life Tributes page to make it easy to share your memories.