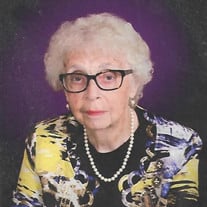 Madge Guy King went to be with her Lord and Savior on Tuesday, September 28, 2021. Visitation will be Sunday, October 3, 2021 from 4:00—6:00 p.m. at Chancellor Funeral Home in Byram, MS and again Monday, October 4, 2021 from 9:30 a.m. until the hour of the service at 10:30 a.m. Interment will follow at Lakewood memorial Park in Jackson, MS Madge was born in Jackson on May 11th, 1937 and remained in the Jackson area her entire life. She grew up in downtown Jackson and graduated from Central High School in 1955. The very next day she married Ernest King and welcomed their first child into the world the following year. Madge was very involved with serving God her whole life. She and her family attended several Baptist churches in the area, including Emmanuel Baptist, Midway Baptist and Van Winkle Baptist. In the latter years of her life she attended First Baptist Church Jackson and remained a loyal attendee until declining health prevented it. She continued to watch FBCJ on television every Sunday morning until her passing. Madge worked at the Baptist Children’s Village for many years and maintained contact with many of her friends and co-workers after her retirement in 2002. Being part of the ministry of BCV was an extremely important part of her life. Madge was also an avid sports fan. She especially loved college football and baseball. She loved going to Oxford to see the Rebels play, but rooted for the alma maters of all of her grand children. Saturdays in the fall would find her glued to the television, especially for the SEC games. She also attended Clinton High School games during the years her children were in school there and remained a loyal Arrow fan all of her life. She also loved attending the games, dance recitals, piano recitals and other events that her grandchildren participated in. She rarely missed one. “Miss” Madge was known far and wide for being an excellent cook, especially when it came to desserts. Anyone who had the good fortune of enjoying her oatmeal cookies, chocolate pie or fudge will not soon forget. Neither forgotten will be her kindness, gentleness and sweet, sweet nature. She will be sorely missed by her family, neighbors and many friends… until we meet again. Madge was preceded in death by her parents, Daniel Vorhes and Eva Guy, her brother Dan Guy and her youngest son, Jeff King. She is survived by her three children; Ernie King, David King (Karen) and Judy Thornton (Steve); her six grand children, Olivia and Hannah King, Tyler, Zach (Rachel) and Brad Thornton, and Katie Thornton Byrd (Caleb) and three great grandchildren. She is also survived by several nieces and nephews, her friend and former husband, Ernest King and her “other son”, Jack Gibbs. Please consider making donations to the ministry of the Baptist Children’s Village.

The family of Mrs. Madge Guy King created this Life Tributes page to make it easy to share your memories.

Madge Guy King went to be with her Lord and Savior on Tuesday,...