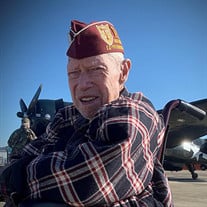 Loyd Everett Williams, 96, from the Monterey Community, went to be with the Lord on Sunday, November 24, 2019 at his home, surrounded by his family and friends. Loyd was born on August 17, 1923 in Jackson, MS. He is a Veteran of WWII, where he served in the U.S. Army. During his time in the Army, he served in Normandy, Northern France, Ardennes Rhineland, and was reported Missing in Action in Belgium. He was wounded and a prisoner of war. Loyd received many medals during his service, including the Purple Heart, Good Conduct Medal, EAMETD Medal, and POW medal. Loyd is preceded in death by his wife of 72 years, Alma Tucker Williams, and his grandsons, Daniel and Justin Carballo. He is survived by his sons, Gary (Carolyn) Williams and Victor (Cindy) Williams; daughter, Kristy (Brian) Stringer; grandchildren, Angie (Mac) Abernathy, Deanna (Richie) Abernathy, David Williams, Ryan (Shelbie) Williams, Nick Williams, Candice Strack, and Rebecca Stringer; and great grandchildren, Wyatt (Kathryn) Abernathy, Camrien and Sydney Abernathy, Jack Everett, Sam and Eli Williams, Trace and Remi Lane Williams, Alissa and Jamison Strack; and great great granddaughter, Landy Kathryn Abernathy. The Funeral will be Wednesday, November 27th at 2:00 p.m. at Chancellor Funeral Home in Florence. The family will receive friends for visitation on Tuesday, November 26th from 5:00 – 8:00 p.m. and again on Wednesday from 1:00 until 2:00 p.m. Burial will follow at Briar Hill Cemetery in Florence.
To order memorial trees or send flowers to the family in memory of Mr. Loyd Everett Williams, please visit our flower store.