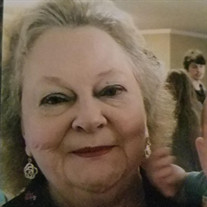 Mrs. Linda Joyce Frith, 69, passed away Sunday, August 4, 2019 at Mississippi Baptist Medical Center in Jackson, MS. Visitation will be Wednesday, August 7th from 12:00 until the 2:00 p.m. Funeral Service at Chancellor Funeral Home in Florence, MS. Burial will follow in the Garden of Memories. Mrs. Frith was long time resident of Florence and a member of Quest Community Church. She retired from the phone company after 30 years of service, she also worked in the office of KLLM. She was a dedicated homemaker but was not much of a pet person. She only allowed 2 dogs in her house; Charlene’s baby, Foxy and Austin’s dog, Rebel. She was a big fan of Elvis, a huge fan of the MSU Bulldogs, and a firm believer in Trump. Mrs. Frith is preceded in death by her parents, John Melvin Lollar and Edna Elizabeth Britt; and her seven siblings, Ed Lollar, John Lollar, Ray Lollar, Bonnie Shows, Pat Nelson, Wanda Aycock and William Lollar. She is survived by husband, Buddy Frith; sons, Scott Frith of Florence and Matt (Sandra) Frith of Florence; sister, Kathy Saxton of Zachery, La.; grandchildren, Byron, Austin, Hannah, Matthew and Kennedy; and greatgrandchildren, Nicholas and Collin. Online guestbook may be signed at www.chancellorfuneralhome.com.

The family of Mrs. Linda Joyce Frith created this Life Tributes page to make it easy to share your memories.