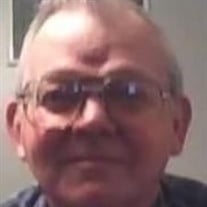 Mr. Leslie E. Stapp, Sr., 72 years old, died on Friday, September 4, 2020 at his home. Visitation will be Wednesday, September 09, 2020 from 10:00 a.m. to 12:00 p.m. at Chancellor Funeral Home, Byram, MS. A graveside service will be held Wednesday, September 09 at 1:00 p.m. in Terry Cemetery. Mr. Stapp was born April 28, 1948 to the late Allen Stapp and Janie Davis Stapp. He grew up in Jackson and graduated from Central High School. He volunteered to serve in the U.S. Marine Corp. He proudly served one tour in Vietnam from 1968 to 1969. On November 28, 1971, he married the love of his life, Linda Slay, and they made their home in Jackson for 41 years until her death on August 23, 2013. He worked for many years with Jitney Jungle. One of his most avid hobbies was coin collecting. Mr. Stapp was preceded in death by his wife, Linda Slay Stapp; daughter, Melinda Stapp; and brothers, Glenn and Bill Stapp. He is survived by his children, Les Stapp (Misty) of Brandon and Bonnie Guthrie of Pearl; six grandchildren: Justin Stapp, Aaron Stapp, Lane Stapp, Giuliana Guthrie, Dakotta Guthrie, and Makinzie Guthrie; one sister, Mary Hodges of Wesson; one brother, Don Stapp (Len) of California; and numerous other relatives and friends. Online guestbook may be signed at chancellorfuneralhome.com.

The family of Mr. Leslie E. Stapp Sr. created this Life Tributes page to make it easy to share your memories.