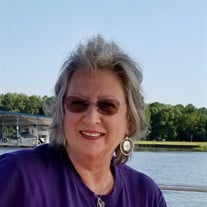 Leslie Ann Clarke was born August 26, 1953 in Jackson, MS as the only daughter of Edwina M. Mize and Charles Gandy. She attended Forest Hill High School where she excelled in track and basketball. Running last leg of the relay team, she was nicknamed “Legsly.” She was captain of the track team and won awards such as Most Athletic, Most Valuable, and the Athletic Award. She was also named fastest female runner in the state of Mississippi. Leslie attended Ole Miss in 1971 and later chose her profession of Respiratory Therapy. She began her career at Hinds General Hospital in Jackson. Her career spanned over 40 years at several hospitals, where she made some of her closest friendships. Her coworkers were her family also and knew her as the OWL or “Lurlean.” Her grandkids also lovingly called her OWL. Leslie was loving, caring, charismatic, and always “down for anything.” She was comical, unique, loved a good prank, a ride with the top down in her VW bug with her grandkids, and always loved to cook a good meal. She loved telling a funny story or talking about growing up on 5109 Sharp Street. She enjoyed reading, sewing, gardening, taking a boat ride, and loved with a passion her LSU Tigers! She married her lifelong love Jimmy in November of 1977. She became a constant presence in Jeff, Robby, and Brad’s life. She enjoyed picking them up after work in her orange and white Oldsmobile 442 and taking them everywhere. Her son Jeff said they fell in love with her before Dad did, told him to marry her, and it happened. Four years later, Erin came along, they moved to Ponderosa Estates, and life began. Her love for her Jimmy lasted until her last day on earth. Jimmy and Leslie had a love of racing and spent decades racing cars with their boys and lifelong friends. Some of her fondest memories and best stories are of times at the racetrack. She was always by Jimmy’s side helping him prepare and was rarely seen on her golf cart without her race pit crew- Pete, Molly, and Sissy. Leslie is survived by her loving husband of 42 years, Jimmy; son, Jeff; son, Robby (Alisa); son, Brad; daughter, Erin (Kyle), grandchildren, Crystal, Madison, Clara-Clarke, Craig, Cooper, Chase, and Casey; great grandchildren, Hayes and Clayton; and her beloved pets, Rocky, Buddy, Elvis, and Lucille. She is preceded in death by her mother, Edwina M. Mize and stepfather Albert J. Mize; and father, Charles Gandy. A visitation will be held 6 p.m. to 8:30 p.m. on Wednesday, July 29, 2020 at Chancellor Funeral Home in Byram, MS. An outdoor service will be held Thursday, July 30, 2020 at 9 a.m. at The Pavilion at Lakewood Memorial Park in Jackson, MS. Face masks are required and social distancing guidelines apply. Leslie was passionate about her animals; in lieu of flowers, a donation can be made in her memory to Animal Rescue League of Jackson. “The Lord is close to the broken hearted: He rescues those who are crushed in spirit.”- Psalm 34:18
To order memorial trees or send flowers to the family in memory of Mrs. Leslie Ann Clarke, please visit our flower store.