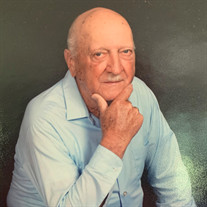 Melvin “Leroy” Wilson, 90, passed away Friday, June 19, 2020 at St. Dominic’s Hospital in Jackson. The family will receive friends for visitation on Monday, June 22nd from 9:30 a.m. until the 12:30 p.m. Funeral Service at Chancellor Funeral Home in Florence. Burial will follow at Richland City Cemetery. Leroy was born December 6, 1929 in Hattiesburg, MS to the late William Henry and Wydell Wilson. He was a proud resident of Rankin County, living in Richland for many years where he served as Assistant Fire Chief, was involved with baseball for kids, and where he supervised the Richland City Cemetery for many years. He owned and operated his own service station, which he built, and was a longtime member of the Rankin County Cattleman’s Association. He was an avid outdoorsman who raised cattle and enjoyed hunting and fishing. He was also a Master Mason at Plain Lodge # 622 and a member of the Wahabi Shriners and the Scottish Rite. Mr. Leroy was known for his generosity and his willingness to help others. Along with his parents, Mr. Wilson is also preceded in death by his brothers, Howard, Bo, and Richard. He is survived by his wife of 67 years, Dorothy “Dot” Wilson of Richland; children, Brent (Tena) Wilson, Tina Wilson, and Don (Lisa) Wilson, all of Richland; grandchildren, Matthew (Jade) Wilson and Jessica (Isaac) Manuel; great grandchildren, Landon, Rocklyn, and Laken Manuel and Rawls and Auden Wilson; and sister, Joyce Porter of Richland. In lieu of flowers, the family request that donation be made to First United Methodist Church of Richland.

The family of Mr. Leroy Wilson created this Life Tributes page to make it easy to share your memories.