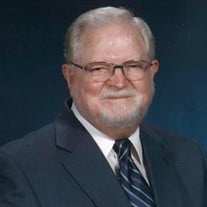 Leo J. Hornkohl, Jr, 87 passed away May 19, 2019 in Jackson, MS. Visitation is Tuesday, May 21, 2019 from 5-7 pm at Chancellor Funeral Home in Byram, MS. A Graveside with military honors will be Thursday, May 23, 2019, at 12:30 pm in Biloxi National Cemetery in Biloxi, MS. In addition to his civilian career as a floor covering salesman, he also served in the U.S. Army on active duty, in the AL National Guard, and in the Army Reserve, retiring with the rank of Colonel. He was the recipient of the Meritorious Service Medal, Commendation medal, the Parachutist Badge, and the Coveted Ranger Arc Tab. Leo was a member of Southside Assembly of God in Jackson, MS. Survivors include his wife, Martha Caillouet Hornkohl; children, daughters Laura Hornkohl and Mary Seale (husband Ronnie), and son Dan Hornkohl (Wife Tracy); step children, Leesa Guyton (husband Jim), David Decareaux, Steven Decareaux, and Anne Clark (Husband Steve); 11 grandchildren and 5 great grandchildren. Leo was preceded in death by his parents, Leo and Velma Hornkohl and a previous wife, Dorothy Edgeworth Hornkohl. In lieu of flowers, Memorials may be sent to Southside Assembly of God, 665 Raymond Road, Jackson, MS 39204.
To order memorial trees or send flowers to the family in memory of Mr. Leo J. Hornkohl Jr., please visit our flower store.