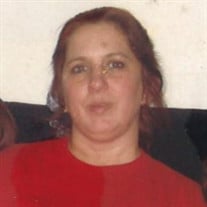 Laurie Ann Grubbs, 56, passed away on Sunday, December 19, 2021. Visitation will be held at Chancellor Funeral Home in Byram on Thursday, December 30, 2021 from 9:00 a.m. until the hour of the service at 11:00 a.m. Interment will follow at Terry Cemetery in Terry, MS. A resident of Terry, MS for the past 16 years, Mrs. Grubbs was born on April 20, 1965 to Dexter and Mary Ann Cox Richardson. She was employed as a pet groomer. Laurie loved her family and was always helping others. She is survived by her husband of 15 years, Roger Grubbs; children, Bridget (Clint) Barnett of Brandon, Marcus Ivey (Florence), Michael Ivey of Clinton, R.J. Grubbs of Hazlehurst, Nick Grubbs of Hazlehurst, Hanna Grubbs of Amarillo, TX, Colton Ivey of Terry, Castin Ivey of Terry, and Crosson Ivey of Terry; grandchildren, Hunter Hemphill, Ann Hemphill, Marley Ivey, and Raylee Ivey; and brothers, Danny Richardson of Terry, Chuck Richardson of Brandon, Rick Richardson of Brandon, and Tommy Richardson of Magee.
To order memorial trees or send flowers to the family in memory of Mrs. Laurie Ann Grubbs, please visit our flower store.