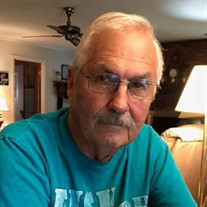 Kenneth Ray Churchill, Sr., 75, left his earthly home on March 18, 2021 to be united with his Lord and Savior, Jesus Christ. He was surrounded by his loving family at the time of his passing. Visitation will be Sunday, March 21, 2021 from 2:00 p.m. until the hour of the service at 4:00 p.m. at Chancellor Funeral Home in Byram, MS. Kenneth was born on October 25, 1945 to Ray and Maxine Churchill in Chico, CA. Ken was the youngest of four children, with three older sisters, who contend he was a constant, but lovable agitator. He was a 1964 graduate of Byram High School where he formed lifelong friendships. He also attended Hinds Junior College. He and his father, Ray, were co-owners of Churchill Construction for fifteen years. He developed himself as an artist, creating custom designed homes and furniture. After his dad’s retirement, Ken worked at Jackson Stone, where he became a master mold builder. From there he worked in Oxford, NC for Gate Precast Company where he trained others in his field. Ken and his wife, Pat, met at Alta Woods Baptist Church as young teenagers and were happily married for 56 years, enjoying life with their three active sons of whom they are so proud. Everyone always thinks that their love story is grand, but theirs was the best. Ken was actively involved in his church, First Baptist Church of Byram and in the community. He was commissioner of the youth baseball program, one of the founders of the booster club, Byram Lions Club and was a proud member of the Chain Carriers for the Friday night football games. He loved to watch, but it was also the closest to the field he could get. Ken was preceded in death by his parents. He is survived by his wife, Patricia, sons, Kenneth Jr. (Ashley), Kevin (Christy) and Kyle (Renee’), Four grandchildren; Austin, Nick, London and Hunter and four great grandchildren; John Hunter, James Wyatt, Ethan and Rivers. Sisters, Kay Foshee, Karen Beck and Carol Busby.

Kenneth Ray Churchill, Sr., 75, left his earthly home on March 18, 2021 to be united with his Lord and Savior, Jesus Christ. He was surrounded by his loving family at the time of his passing. Visitation will be Sunday, March 21, 2021 from 2:00... View Obituary & Service Information

The family of Mr. Kenneth Ray Churchill Sr. created this Life Tributes page to make it easy to share your memories.