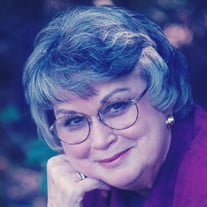 Kathryn Elizabeth “Betty” Campbell Rosson, 85, died Thursday, November 7, 2019, at Highland Home in Ridgeland, MS. The funeral service will be Monday, November 11, 2019, at 11:00 at Madison United Methodist Church with Rev. Jim Genesse and Rev. Linda Rickman officiating. Visitation will be prior to the service beginning at 9:30 at the church. A graveside service will follow at Mizpah Cemetery in Durant, MS. Chancellor Funeral Home is in charge of arrangements. Born on June 5, 1934, in Durant, MS to the late Harvey Land and Mary Kathryn Feild Campbell, Mrs. Rosson was the widow of Mr. Robert T. Rosson and a native of West, MS. She was a graduate of Durant High School and completed her nursing degree through MS Baptist Hospital School of Nursing in Jackson. Throughout her career as a registered nurse, Betty worked in emergency care and surgery. She was a member of Madison United Methodist Church and a former member of Ponchatoula First United Methodist Church. Betty enjoyed cooking for her large family and sharing her favorite recipes. She most enjoyed times when her boys and their families were together, sharing a meal and laughing while re-telling old stories. Her nurturing nature extended beyond her career as a nurse. As a grandmother, she welcomed each of her grandchildren as newborns and assisted their parents in the first tiring days. Later, she was a full time caregiver for her mother-in-law and added on to their home to ensure she could live her final years close to family. Survivors include her four boys: Robert T. “Bob” Rosson, Jr. and wife, Beth of Oxford, MS, Chris Campbell Rosson and wife, Carol of Madison, MS, Terry Land Rosson and his wife, Sharon of Daphne, AL, and Glenn Cummins Rosson and wife Lisa, of Mobile, AL; daughter-in-law, Mary Rosson of Knoxville, TN; a sister, Ann Campbell Peeples and her husband, CB of Douglasville, GA; seven grandchildren: Brett Rosson, Ryan Rosson, Sally Kate Walker, LauraBeth Rosson, Mark Rosson, Lauren Dunnam and Ansley Rosson and eight great-grandchildren. Memorials may be made to Madison United Methodist Church at 100 Post Oak Road, Madison, MS 39110.

The family of Mrs. Kathryn "Betty" Rosson created this Life Tributes page to make it easy to share your memories.