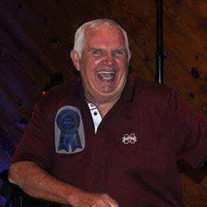 Karl Dougherty, age 68, departed for his heavenly home on Tuesday, August 14, 2018 while in Baptist Medical Center in Jackson, MS. Visitation will be Thursday, August 16, 2018 from 4 pm to 7 pm at Chancellor Funeral Home, Byram, MS with visitation again Friday, August 17, 2018 at 2 pm with service at 3 pm at Hickory Ridge Baptist Church, Florence, MS. Pastor Terry Fant and Pastor Johnathan Sherwin will officiate with burial at Garden of Memories in Florence, MS. Karl was born November 29, 1949 in Vicksburg; MS. He was in the center of 11 siblings that filled their home with joy, laughter and plenty of shenanigans. Karl accepted Christ and was baptized at Wayside Baptist Church in Vicksburg at an early age. Karl served all of us courageously and honorably in the United States Army in Vietnam at the tender age of 19 and completed his tour of duty in Germany. We were all so blessed that Karl returned to us as so many from that conflict did not. He married and was blessed with a beautiful daughter, Karla that stole his heart forever. Karl obtained a Master License in A/C and refrigeration and owned his own business for several years. In 1986 Karl joined the family of “The Baptist” and served joyfully and faithfully for 31 years until his retirement in 2015. Karl was a loving son, brother, father, grandfather, husband and friend and served life well as a true joy giver to all he met. There was always a twinkle in his eye and a quick smile for any he encountered. Laughter was Karl’s medicine for all that he loved and for anyone he felt needed lifting up. Karl was quick to toss that Dougherty charm and if you gave him a moment, he would steal your heart. Karl was always busy doing something, preferably outside and took great joy in keeping his yard beautiful for all to see. Karl enjoyed the simple life and was content with the love of a great family at home and at work. Karl was a member of Hickory Ridge Baptist Church in Florence, MS where he continued to spread love and joy to all. Karl’s presence will be dearly missed but he would want us to look forward to our reunion in heaven as he is already enjoying the loving welcome of his Lord and Savior, Jesus Christ. He is preceded in death by his father, Charles Wilson Dougherty; step-father, Charles Andrews and sister, Tina “Bit Bit” Dougherty. Karl is survived by his mother, Carmen Andrews of Byram; his loving wife of 15 years Kay Dougherty of Terry; daughter, Karla Case (Tim) of Madison; brothers, Oscar “Man” Dougherty (JoAnn) of Vicksburg, William “Benny” Dougherty (Jewel) of Utica, Ray L . Dougherty (Gale) of Florence, Rusty M. Dougherty of Byram; sisters, Zita Williams (David) of Vicksburg, July “Dood” Richardson (Mack) of Vicksburg, Frances “Sugar” Romedy (Randal) of Mendenhall, Lita “Monkey” Edwards (Gary) of FL and Peny Eichwurtzle (Doug) of Harrisville; grandchildren, Meg, Anna Kay and Paige and a host of nieces and nephews. In lieu of flowers memorials may be made to Wounded Warriors of Mississippi. .

Karl Dougherty, age 68, departed for his heavenly home on Tuesday, August 14, 2018 while in Baptist Medical Center in Jackson, MS. Visitation will be Thursday, August 16, 2018 from 4 pm to 7 pm at Chancellor Funeral Home, Byram, MS with visitation... View Obituary & Service Information

The family of Mr. Karl "Punkin" Dougherty created this Life Tributes page to make it easy to share your memories.

Karl Dougherty, age 68, departed for his heavenly home on Tuesday,...