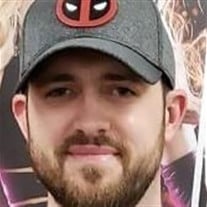 Jonathan Caleb Brown.....was welcomed into the arms of his parents at 7:57 AM on April 4, 1986 in Colorado Springs, CO has now walked into the loving arms of his Lord and Savior, Jesus Christ at the age of 32. He died peacefully at home with the love of his life, Linda Morey, of a sudden heart attack in the early morning hours of September 9, 2018. Jonathan's life on earth was cut short for the Lord had better plans for him in store. Preceded in death by his grandparents: Herbert S. Brown, Albie Alford, Donald Farmer and Marie Jinks Farmer and cousins Kimberly Michelle Farmer and Miranda Farmer Walters. Jonathan is survived by his life's companion, Linda Morey, his loving parents, John Herbert Brown and Janice Farmer Brown, his big brothers, Jimmy Brown and Christian Brown, 3 uncles, 5 aunts, 18 cousins, several nieces and nephews and an untold number of very close friends that were made during his brief but wonderful time here on earth. The old saying "never met a stranger" certainly applied to this young man. But it goes further: He never met anyone who didn't like him. The doctors are saying that Jonathan had an enlarged heart. This is certainly true. He had one of the biggest and kindest hearts that ever beat, always thinking of others. Family and friends meant everything to Jonathan, especially family. Nothing on earth was more important. Everyone who ever met Jonathan were in awe of his kind and gentle soul. If one's life is measured by the amount of love that is given and received, then Jonathan swiftly succeeded with greatness. He is now our angel watching over us and being an inspiration to us all. Jonathan was a 2005 graduate of Terry High School and received an Associates Degree from Hinds Community College. He was also a member of Country Woods Baptist Church in Byram. “They that love beyond the world cannot be separated by it. Death cannot kill what never dies.” ~ Williams Penn Visitation will be 5-8pm Friday, September 14, 2018 at Chancellor Funeral Home in Byram. Services will be 11am Saturday, September 15th at Country Woods Baptist Church, 6737 Siwell Rd, Byram, MS 39272 with visitation 10-11am Saturday at the church. Pastor Jon Daniels will officiate the service. Interment will follow at Natchez Trace Cemetery in Madison. In lieu of flowers, friends and family who knew and loved Jonathan may elect to contribute to a fund set up in his name by his brother, Chris Brown, to help cover funeral and memorial expenses. Donations can be made via: https://www.gofundme.com/funeral-expenses-for-jonathan-brown
To order memorial trees or send flowers to the family in memory of Mr. Jonathan Caleb Brown, please visit our flower store.